I've been getting tetchy of late. It's the time of year; I loathe the overcast skies, the short days, the desolation and the cabin fever that grips my soul with a firmer grip every year I get older. There's crap at work, crap in the family and my patience for people and their bullchit is pretty much non-existent right now. Spiritually, emotionally - I'm about half past dead. What is to be done about it?

Why - go out and see people, of course! Or at least, that is my wife's thought. Were it up to me I would close the curtains, tuck my .45 under the pillow and go into hibernation until the spring comes. But we had been invited to dinner by E, a little old lady the wife befriended at church. Gah - I had visions of the typical old women of my family - an excruciating night of them talking about their house plants, or themselves, or their health, or what they saw on day-time TV, or... oh God, kill me now!

But E was not like that at all. Although she's in her 70's she's sharp as a tack. We got invited in and E was making potato pancakes for supper. She and my wife chattered like birds - and it was INTELLIGENT chatter! I'm serious. JFC - the oldest women in my family are at least 10 years younger than E, but by the way they conduct themselves, ya'd think they were in their early teens.

E was born, near as I can tell, in what is now Romania. Before WW2 there were all kinds of borders and countries re-defined as Hitler ramped up and rebuilt the Axis powers. In those days, troopers routinely tramped up the road, booted the peasants off their lands to reassign them elsewhere - and every second Euro of the time was a refugee of some sort. (I believe the jargon of the day referred to them as Displaced Persons, or DP's.) During her childhood they were run off at least two properties, and she lost her father when he was conscripted to fight in WW2 for Germany. 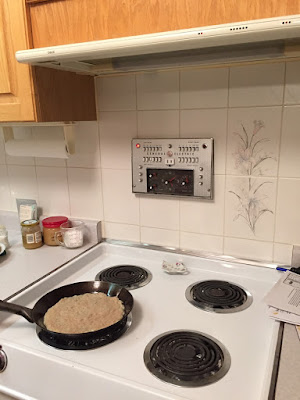 I snuck a pic of E's kitchen. Lookit the high tech push button
stove control panel. :)
She is the original owner of this house, built about a mile
away from my mom and dad's first house.

As the war ran it's historical course E and her family were tossed about on the tides of history in a way that guys like me only read about. The eastern front had collapsed, and the Russians came roaring out of Russia, hell bent on revenge for the beating they'd taken in their own lands. E's family found themselves on the run again, and desperately fled west, barely ahead of them. Eventually their road ended - stuck in some east German city. Somehow her mom had gotten them all to the train station together - only to be refused passage. The last trains were pulling out, there was no room for them, and this was the end of the line. Mom and her young family were now at the mercy of the fates and things didn't look good for them at all.

"You want to tell me there's no God?" E challenged us in heavily accented English, "I can tell you that there certainly is." E's hands are knarled and crooked from arthritis and hard work and they shook like leaves in the wind as she poured coffee. Whadda they call that? Palsey? I dunno - I see all kinds of old folks with it but E paid it no mind - she got most of the coffee into my cup and topped up the wife and continued with her tale.

E's mom was at the end of her rope. She was stuck in a city that was about to be either over run by murderous Russians, or pounded into rubble by Allied carpet bombing. She gathered her children together and wept. All was lost.

A soldier ambled up and said, "Momma - why are you crying?" and E's Mom explained her woe. The trains were full. There was no room. She and her children were finished. She didn't know what to do.

The soldier would have none of it. He dragged the lady and her kids onto the train, bellowing orders for everyone to scrunch up and make room - or else! Thanks to that soldier, E and her family made it west - away from the Russians. That afternoon, after the train left, Allied bombers incinerated that small east German city with white phosphorous bombs. Firing an entire city with phosphorous is as evil a thing as nuking it; maybe worse. First you get the blaze going in the city center, good and HOT. As the heat builds, the firestorm sets up it's own weather system: hot air rises and draws in cooler air from the surroundings in a demented, hellish forced draft blast furnace that can reach temps so hot - steel will burn. The town was literally reduced to cinders and the Russians had to hold off and let it cool before they occupied it. The melted asphalt roads were a gooey mess.

Life improved for E and her family after the war. Somehow their father found them by asking after them wherever he went. He asked about family, he asked about friends and chased wild geese hither and yon as he searched for his kin. Eventually they reunited and they emigrated to Canada in dribs and drabs. With no education or skills, E's mom did crappy, low paying scut work to get by and set up a future for her kids. When E married her husband, he started up a small machine shop and they bought the house we were visiting in - in 1967. As you can see from the pics - it was an opulent palace that E's mom would have heartily approved of. 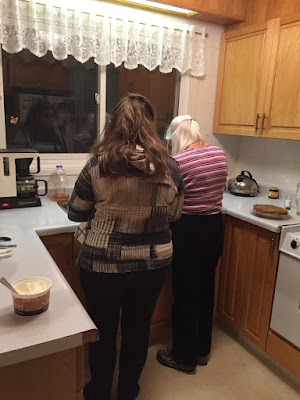 After supper the girls had the plates and table cleaned off faster
than it takes ya to think about it.

"So what about you two?" E asked. What is your life story? HAR HAR HAR! All the wife and I could do was look at each other and gawp and stutter. We've never been cold, we've never been hungry, and we certainly never had to run for our lives. "We met in high school, got married...and here we are," I stammered. "We're...we're boring," I chuckled. E seemed to approve of us and our marriage that has held up through some seriously odd times.

Before I knew it, it was 9:00 and I had to get home to let the dawgs out to pee. When I got home I kicked them out and opened a beer and shook my head. I've been so caught up in my own troubles of late, that I've lost perspective at a time when I need it more than ever before. I figured I would need at least a beating at the hands of Quartermain or Pete to get my head on straight - but all it took was sitting back and listening to a couple wise women chat.

It's odd how events go. The women in my family, and those in the news and in the entertainment industry have made a chauvinist of me. I regard the modern empowered woman with contempt and disgust that defies even my best efforts at chivalry. But right here, right under my nose, in the midst of a raging gender and culture war, a tanking economy and uncertain times ... I find these two gems. And I'm married to one of 'em. There are times I think I should sue Tom Hanks and Forrest Gump for character infringement. Sometimes I don't get what I want - but I always seem to get what I need, whether it's a boot up the ass from one of my retarded peers, or a ring side seat at a living history lecture with truly powerful, intelligent women. 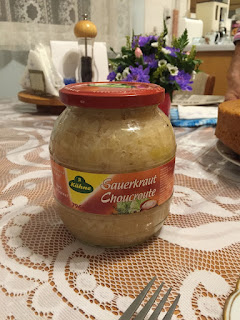 Along with all that food for thought, we
discussed food to eat!
I once dumped a jar of kraut out at hunting camp and
even the magpies and whisky jacks wouldn't touch it.
Apparently that wasn't 'real' sauerkraut - the good stuff
tastes like this stuff in the pic.
E was right - if you make kraut right - it's mighty fine stuff.

Hope your weekend was good - and be sure to have a good Tuesday tomorrow.
Posted by Glen Filthie at 15:43