I've been through the wringer with this past week. It wasn't that bad, really - it's just that I've been carrying a shit-ton (tonne) of baggage with me for a long, long time. Thanks to new-age politics and ... ahem..."changing moral climates" (PBBFBFBFFFFFFFTTTT!!!!) - my family burned down years back. I won't re-hash it; those scars have healed over enough for me to get by for the most part, but earlier in the week... I had my moment out on the morning Dawg Patrol. I'm probably on the verge of losing my job, my family's in shambles and I may or may not be looking at some tough times... but honesty demands that I acknowledge that I am responsible for all of it - and I've been getting squished under a load I was never fit to carry. I couldn't do it anymore. I am not an overly religious man and can count the number of times I've fired off a serious prayer on one hand... but I knelt down in the snow on Dawg Island and dumped the whole kit and caboodle on my Maker. I can't do it anymore.

I have to forgive some people who've hurt me, and apologize for hurting them in return. I fired off an email at my estranged daughter and did precisely that. I dunno if she will even get that email, if I'll ever see her again or what will come of it. All I know is that I have to forgive her before I can forgive myself. It was a big load off and a big deal for me. It's taken me 8 years to get here. Who woulda thunk that getting rid of a load like that would be so hard? In an age where tolerance and sin are in bed together I don't know how to handle the predicament I'm in.

In any event I was over at Turdie Beach's at The Fourty Five and pooping in the comments and surfing around and came across the blog of one of his readers. (Careful boys, there's a little too much estrogen going on over there if ya catch my drift, HAR HAR HAR!) But the womenfolk had an interesting topic up - just what the hell IS forgiveness anyways? When ya do it, are you surrendering? Does it mean you have to open yourself up for more shit and abuse? And accept it? 'Forgiving someone' means different things to different folks by the look of it.

When I forgive - to me it means 'cease fire'. No shots thrown, no lumps received - let us try to get along as best we can. Our family feud got really, really nasty really fast. I know the people involved in that did some awful mean things and if they did 'em once - they're certainly capable of doing it again. They know I am too. I will forgive - but I will never forget. Is that really forgiveness?

I suppose I'll have to throw that one at my Maker too.

Perhaps it's a good idea to lighten up a bit. It's a thoughtful, introspective day here at Firebase Filthie, but I still have time to work on weapons of unimaginable destructive power! 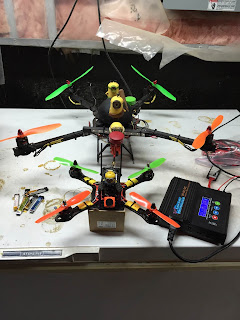 See the little one in front? I just finished it! Latest generation flight controller
with the F4 coprocessor. I have
very fat fingers and getting around in the guts of that thing
with a soldering iron is an exercise
in frustration. That little bugger will easily do
60 MPH. Boys are gonna have to be REAL quick on their
12 bores, HAR HAR HAR!!!!

I don' want to see any rude jokes in the comments about my Crapcopters either. Just lookit:

No animals were hurt in the making of this film - only
a few expendable retards. There's more where they came from.

HAR HAR HAR! Have a good Saturday!
Posted by Glen Filthie at 07:18