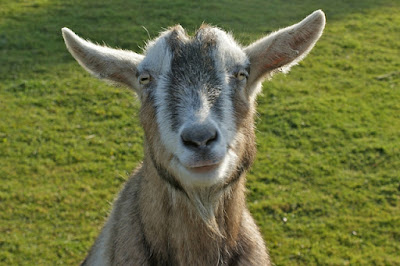 Amidst allegations of sexual misconduct, the Principal of Uncle Bob's School
For Wayward Boys N' Retards, Glen Filthie - has been terminated.
"Anything that goat says is a damned lie!" he gobbled, as he was led away from
the school in handcuffs. "It's all Quartermain's fault...!!!"

Every second Hollywood or celebrity media slob is getting fired out of a canon for all their past sexual misdeeds. The bloggers I read and respect have responses right across the board too. Everyone of ‘em is legit; they may have the right of it and I could be out to lunch. Basically I am on board with the Z Man, I coulda writ that screed myself – albeit not nearly as well.


I don’t think anyone is seeing what is happening here though, caught up, as they are in the schadenfreude that goes along with seeing the most despicable, deplorable liberal morons getting a long-deserved comeuppance. This is no mere fad. This is not the daily typical dealings between pimps and whores. This is the beginning of the fall of the political left, praise be to God!


Consider: conservative family values failed back in the 60’s – maybe even before that. Free love, feminism, socialism, welfare, abortion, booze, drugs, changing social values – all that turned the noble American woman into a cheap slut. Back in the day women started being promiscuous, faithless and abusive to their men. Marriages folded, couples split, children went without fathers and sons went without role models. Daughters got hit hardest of all; their role models were replaced by screeching whores and Marxists that gave rise to women like Hillary Clinton. Oh, they had tons of fun when they were young, establishing a career, playing the field, asserting their new found power.


But today? Their sons detest them. Their daughters are starting to as well. And their husbands are sick and tired of them and are abusing their wealth and authority to bang gullible young liberal bubblegummers. Some are outright pedos. Liberal women, lonely and most with barely a cat for company in their golden years… are beginning to see the magnitude of their folly. Hell hath no fury like a woman scorned… but how can any man respect the modern liberal woman? Their men are so repulsed by them that they’ve become disgusting chads or effeminate faggots or other degenerates. Oh sure, she can still blame men for all her problems, but the hard, cold truth won’t be denied much longer: men that have warm, loving women that genuinely love and care for them – don’t cheat. They don’t need to. When women ask ‘Where have all the good men gone?’ I say that they’re all happily married – to good women. Nobody automatically blames the man for failed marriages anymore – the fingers have been pointing to low women for a long, long time now… and rightfully so.


That’s what all this is about too – failed liberal women are desperately trying to salvage themselves. There is no future for old whores. For their men – the message is clear. Shape up – or face retribution. Without a moral compass though, there’s no way for either of them to redeem themselves.


Gazing into my crystal ball, I see the way paved for the rise of The American (or Canadian) Renaissance Woman. She’s going to be young, she’s going to be smart, and she will respect and love her man the way her elderly matriarchs did not. She’s going to respect herself too, unlike her foremothers. And unlike them, she will be worthy of that respect.


When that happens, things will start to turn around for all of us.
Posted by Glen Filthie at 11:44