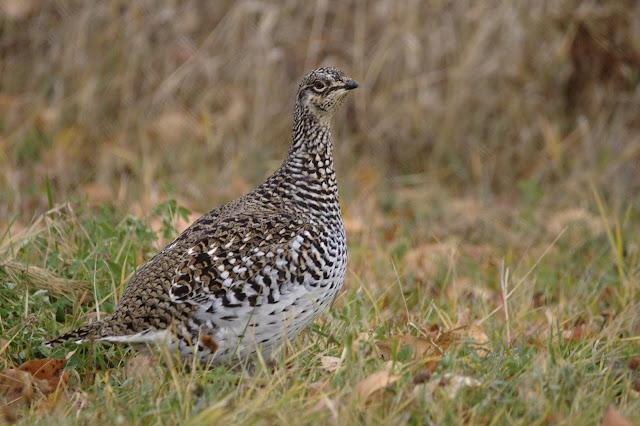 What is that? I don't think it's a roughed grouse. I know it isn't a Gorges Grouse... a Sharptail, perhaps?

I may just hunt them again next year, if I take the notion - but it would have to be done right: a 28 or .410 double barrelled shotgun (side by side, of course) - a flask for the chill and a pocket full of shells, to be used only once the quarry has taken flight! When you're my age, the method of taking the game becomes far more important than filling bag limits. 12 and 20 bores are too big to make for good sport with accomplished wingshots like us, HAR HAR HAR!

The best bird I ever ate was a grouse that Skin Bag shot with a club .22. He wrapped the bird in foil, threw some soaked corn on the cob (still in the husk) on the BBQ and we ate like kings. That was almost two decades ago! I went down that road where he shot it, a couple years back - it's no longer a beat up gravel road in the back country; the yuppies moved in and it's all fenced off ranchlets now.

Funny how a fella remembers taking a grouse with the smae fondness and clarity that he takes a trophy buck. They're all trophies, and that is something the competitive youngsters need to keep in mind.