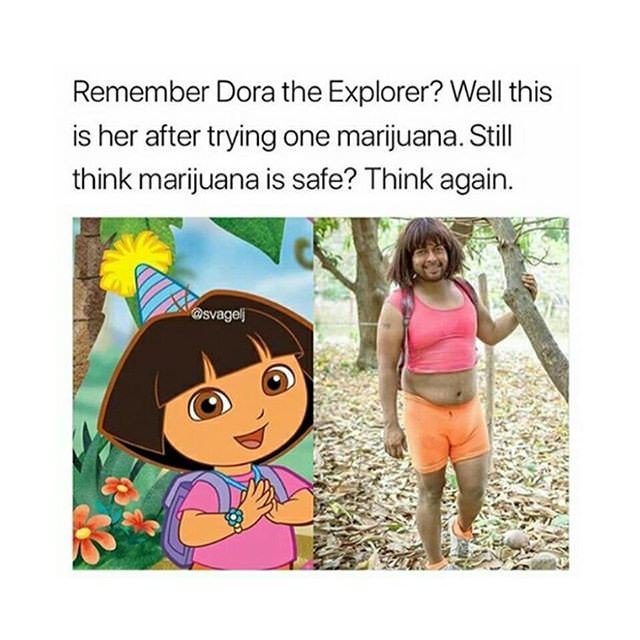 Dora!!! What happened to you?

Up here in Canada our idiot liberals have legalized weed. Somehow, these idiots think that they will be able to now regulate it, tax it and control it and that all the problems with it will go away. It won't of course, because any idiot can grow this crap and sell it cheaper than the gubbimint ever will. I predict that 'legal weed' is going to be yet another liberal boondoggle and multimillion dollar fiasco. The black marketeers won't even have to cut their prices.

That's the first lie that will pop for the pot heads. The second one will take some time but I believe we will see it sooner rather than later.

That is the myth that this chit is a harmless weed or herb. I've seen long term users and you can tell they are hard users. The worst ones are noticeably slower and more listless and disengaged than regular people. But there's another issue that I can see a problem with. A couple years ago our senior sales guy was a notorious pot head. He was just beginning to show the effects of a hard user when I knew him - but young enough to be in his child bearing years. When his second wife gave birth to their first child together - the child was born brain dead. Yeah - I don't know for sure whether heavy pot used had anything to do with it - but it sure as hell couldn't have helped. Is drug use a 'victimless crime'? I dunno - you tell me, I suppose. Look for more birth defects and problems with the children of hard users.

The third myth that will get popped, in my opinion, is the idea that 'pot isn't a gateway drug.' I think that we are going to find out that it most certainly is. I sincerely hope that I'm wrong about all this - but I have an annoying tendency to be right about stuff like this.

The trick in life is knowing which can your Alphaghetties are in, and which ones are full a worms.

Look after yourselves and your kids and have a good Sunday.