Last week Big Al had to let one of the dummies in the lab go. Apparently he went out for a smoke, fired up a big blunt - and spent half the day higher than a kite.

When Al hired him me n' Flapz took one look at him and said to each other: "Pot Head!" Then we started raggin' on Al and accusing him of being a bubble head too. Of course he told us to get stuffed.

So after the firing, Al sat in his desk while Flapz gloated. "Filthie and I profiled him right off the bat, Al. Did you know that guy really isn't a kid? He's in his thirties - and still has his parents driving him to work!"

"Well, you two assholes can hire the next one then!" Al groused. I fled as Al made to grab a heavy stapler to throw at me. I went into the lab where Brent was fuming. "Can you imagine, raising your kid with a fuggin work ethic like that?" he griped, "Cripes - all we need is a guy with a pulse who gives a damn. If you can't make it here...where else is there for guys like that?" 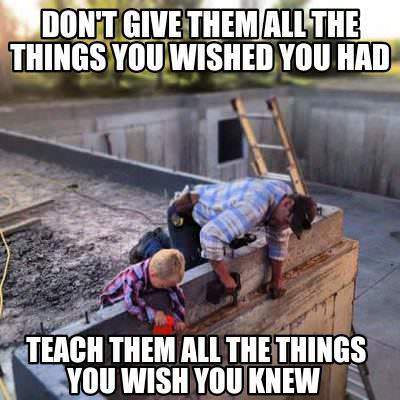 This looks like sage advice on the face of it...

My parents tried to give me all the things they wished they'd had. They failed in spades, I did not turn out the way they wanted me to and they make no secret of it. It used to hurt, still does sometimes - but ya come to grips with it.

Unlike them I tried to teach my daughter the things I wish I had known when I was younger and instill a work ethic - and she fought me every step of the way and hated me for it. Ya ever see that motivational poster with beautiful inspirational seaside landscapes? "If you love something, let it go. If it comes back to you it's yours. If it doesn't, it never was." I used to laugh at that and think some chit house poet came up with it for a Hallmark greeting card or something. But now I know exactly what it means.

I wish I had something insightful and inspirational to say about parenting and kids - but I'm tapped out! All I can say is this: kids are a crap shoot. Crappy parents can have great kids, and good parents can raise monsters. If we're all lucky and we don't do anything stupid - hopefully our kids will land in the middle of all that.

Hey - who's the idiot that started this maudlin conversation, anyways? Have a great Tuesday!