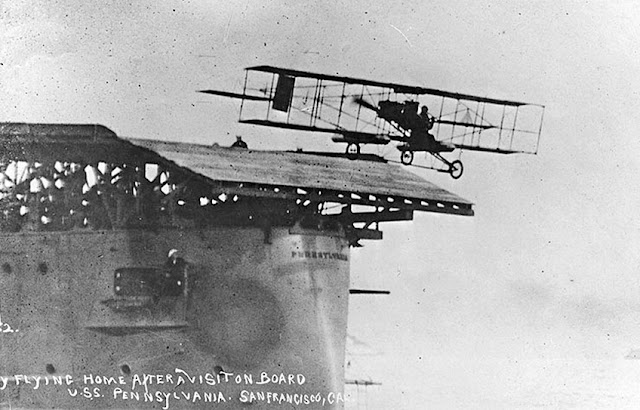 
When the airplane first went to war everything upstairs was fairly amicable. Because they handled like pigs and payloads were absolutely abysmal - the foes often passed each other Up There with a friendly wave.

The lore I've read says that a few unsportsmanlike sots started taking up bricks and chains to throw at their enemies - and the fight was on. Pistols and rifles went up next, but the problem was getting off a shot without hitting a piece of your own plane. Then the next trick was getting a machine gun Up There that would fire through the prop out front without shredding it. Things got downright uncivil after that, despite efforts of the gentry to keep some kind of chivalric code in place. There were heated discussions about the treatment of German aces in Allied squadrons, particularly the British - who didn't want to kill the Red Baron. Supposedly they bloviated about only wounding him because it would be bloody unsportsmanlike to kill a nobleman who had shot down something like 78 Allied pilots. The story goes that The Baron was lining up on a newbie fighter pilot - later to be known as Wop May, of Canadian bush pilot fame - when another Canadian formed up on his six - and shot The Baron down in flames. Captain Brown's resume can be seen here.

Innovation piled on advancement and today there's all kinds of talk about hypersonic 'scramjets' and weaponised drones that are so sophisticated that they are even better at telling friend from foe than humans are. I dunno how true any of that is - but I have no doubt it's coming.
Posted by Glen Filthie at 05:45