A Teacher's Work Is Never Done...

You've caught me at one of the most pleasurable times of my job as Principal of Uncle Bob's School For Wayward Boys - grading the coursework of a successful student! Harold is the latest of our retarded... errrrr....  Gifted Opportunity Students!

Fact is he was SO gifted, we put him in an accelerated Gunology For Savants program! We get a lot of savants here at the school where the kids are otherwise so damned stupid they can't work a roll of toilet paper - but have other incredible talents far beyond those of ordinary men. For example - Quartermain can charm supermodels into the sack at will and has invented sexual perversions that not even the democrats can fathom. (Note to self: better not let the Donks get close to him in the next election). Mad Jack can't remember what he ate for breakfast, but can tell you which bourbon he was drinking on June 1st, 1955. Not to toot my own horn, ahem.... but my piloting skills are legendary. I am a senior member at the RC airfield and the senior officer of the RCOF (Retired Canadian Old Farts (errr - don't tell 'em I'm not retired or I'll get kicked out)). As you can see we have quite the stable of academic over achievers here at Uncle Bob's!

Here is what has me so excited - behold, and stand in awe of Harold's work, O mere and foolish mortals! 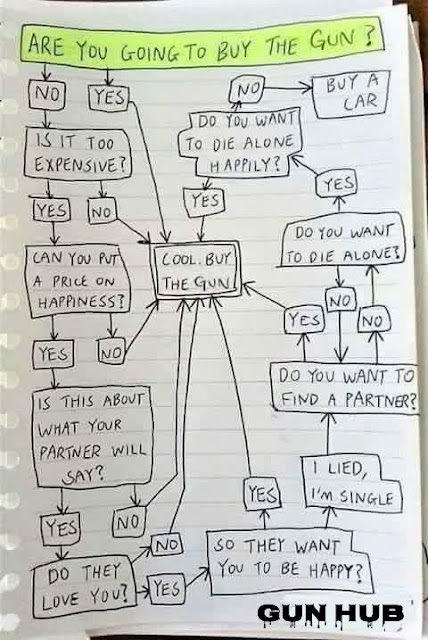 What you're looking at boys - is the Grand Unified Theory for gun ownership!!! Believe it or else!!! If ya don't believe it - get out your crayons and trace it through... it even makes provision for The Exception To Every Rule and even disqualifies that! This is not only a giant philosophical leap for mankind - but peoplekind too! HAR HAR HAR!!! In your face, David Hogg!!!!

Hmmmmmm. I see a vintage antique Martini Henry in my future, or maybe a three band Snider Enfield for those warm summer days in the back country. Now that your occupation of the moral high ground is scientifically proven - what is on YOUR acquisition list?
Posted by Glen Filthie at 12:37