Happy Easter! Jesus Was A Homo!

Well it's easter again but this one is different for me. It's my first one as an outhouse Christian of sorts, and I gotta say it's rather uncomfortable. There's A LOT of really angry, bitter people that hate the faith with the heat of 2000 suns. 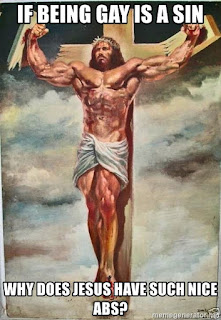 The rage heads are out in force.
It's funny how the people that post stuff like this
are always the first stone and dung throwers in the
oh-so-fashionable sensitivity and diversity mobs.


Serves me right, I used to be an atheist that laughed at Christians and mocked them too. 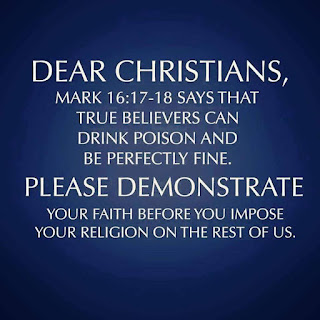 Hmpfff. I'm on my first pass through the new testament
and I don't remember seeing that.
Yannow, I haven't seen a sanctimonious holy rolling bible
thumper in decades.
I see that sort of behaviour every day among the feminists, Marxists, queers,
atheists, and other degenerates though.

Every time you turn around, these angry atheists are proclaiming that the faith exhorts the faithful to so shit unto others just as they themselves do it. I'll say it again - I am no religious expert, I have no experience with this faith thing - but I haven't come across one single thing in the bible so far that tells Christians that they can treat others like shite or look down their noses at them. Fact is I have read passages that specifically and clearly forbid that kind of behaviour. In fact, it specifically admonishes the faithful look at their own faults before pishing on others... Do any of these modern latter day scholars even READ the bible they hate so much? And a happy eichst de reicht ze roggenzahoggen
to you too, young lady.
That li'l gal will make a fine social justice warrior one day,
HAR HAR HAR!!!


The biggest problem I have with the faith is the mythology of the crucifixion and  resurrection. That just sticks in my craw as I am a modern man, specifically raised and educated to reject superstition and boojum voodoo. I think a lot of modern and new Christians must struggle with it to some extent. 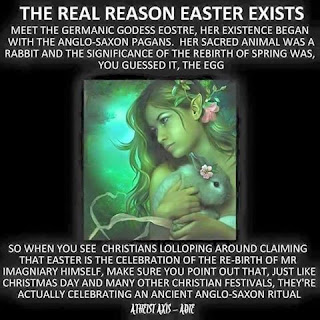 LOL. An old goat of a blogger that I love to hate is lolloping around telling
everyone that in addition to all my other crimes,
I stole all my holidays too. 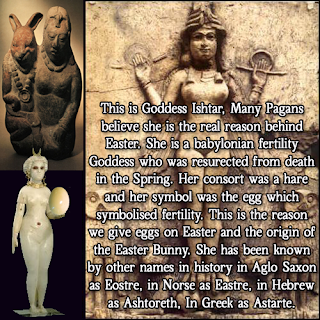 Errrrr.... so did I steal easter from the krauts or the Babylonians?
And who did they steal it from?


I'm okay with it. Seriously - whatever. If some idiots want to piss all over themselves and the faith I have no problems with it. In fact, somewhere in the New Testament one of the disciples said that kind a thing isn't my problem. I was going to crap in the comments of that old fart's blog for a rude joke, but left him in peace after recalling that passage. Hmpfff! The bible works!!! Who woulda thunk it??? In fact, there's a sort of rude inside joke that me and my Maker have on the old fart - the old fella has no idea that the christianity saved him from another angry hissy-fit! HAR HAR HAR! HAR HAR HAR! I have always believed that God has a sense of humour. Maybe my lesson in all this is that I should appreciate idiots for their entertainment value and not get angry with them? Perhaps there's a rude joke in all that on me too! Recently one of our elders said that God put those idiots on this earth as surely as the rest of us, and if we have problems with them, it's on us - not the idiots. Further, it's on us to find a peacable solution to their issues too. For me, it is a difficult lesson to remember and retain. 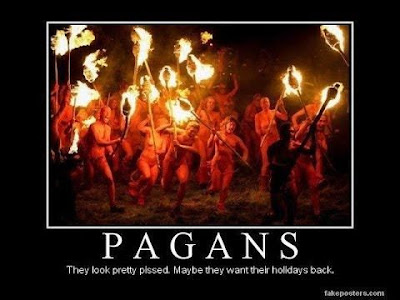 For us up here in Canada easter is not a time of fertility and rebirth. It's -10C out there, the snow is gonna be there for at least another three weeks, and of course, my hoople-headed dawgs want me to go out and play in it with them at 6:30am! I suppose for us up here in Aaaaaadmontin, there are elements of easter that make it even more appealing. I could sure use some spring right now. Easter is a reminder to us Canadians that fair weather is just around the corner. Also that we've survived another winter.

If I make it by the church today, I will toss out a few prayers for my family as I always do - and maybe one or two for you and yours. As always, have a happy easter and God bless. It's a darned tough time to be a Christian out there. 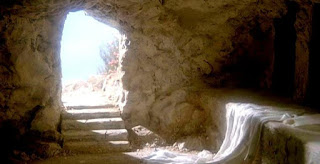