I am not politically correct. I am not a racist either. (Yes, I know that some people consider sticks and stones and broken bones as racist - but those idiots don't know what the word means). Whenever some coloured idiot or liberal rage head screams about racism, 9 times out of ten they are schlepping for the cameras and 15 seconds of fame, or ginning up hate for Whitey, or looking for cash and prizes in our liberal infested courts.

Years ago I got invited to an actually racist forum called Nigger Mania. It wasn't particularly interesting; I suspect it may even have been an FBI honey pot. That, or there are some seriously angry people getting seriously fed up with blacks. Being a contrarian, I poked around in this forbidden territory but didn't post. They had a mildly productive joke forum that occasionally  produced the kind of filthy ethnic humour I like. But most of it was just real hate and eventually I got bored and wandered away.

On  a related note, Z has a good one up today about the war for the social media. YouTube has come out against the gunnies - they are even threatening censorship against gun club stubfarts and black powder geeks like yours truly. And of course Fecesbook and Twatter are banning high profile conservatives often on fake pretexts of inciting violence and hatred and racism. Yawn.

I wonder if shabby treatment like that being dished out by the tech giants will actually drive people to sites like Nigger Mania instead? There is going to be some blow back to this, I assure you. I don't tweet or facebook myself - but - screw OyTube if those a-holes think they are going to reprogram me and act against the interests of the shooting sports.

In any event, I found a pic that relates all this gibberish in one image. How, you may ask? How can you get racial, hateful, black, and gun themes wrapped up in one convenient pic? Behold - and have yourselves a great Monday! 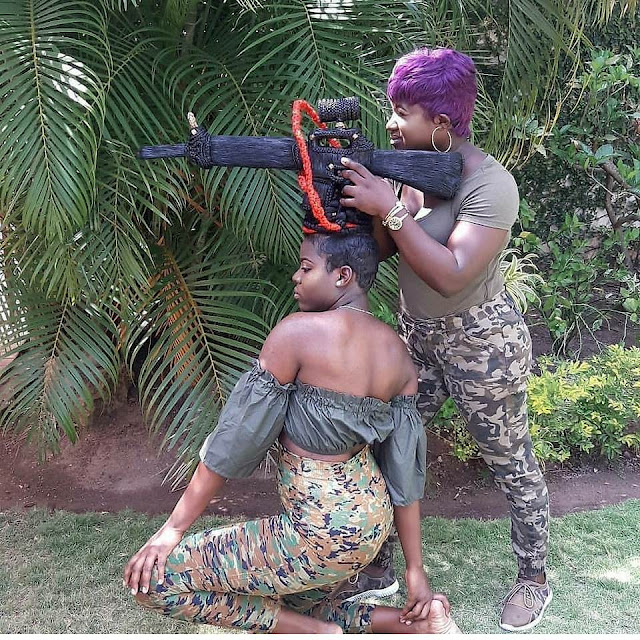 If the Nigger Mania forum were still around today, you might
see something like this in the joke forum.
My question to my moral and intellectual superiors is this: is it just
as racist for me to laugh at this pic as it was for these two ladies
to pose for it?
Yannow what? I don't care what those a-holes think! Have a great Monday.