Kim du Toit is making sammiches over on his blog.

Sorry about that - the fuggin link-thing on blogger is busted again. (No doubt, one of Blooger's pipe-polishing Queerbec fwenchmen is responsible! Flog the lot of those poxy bastids!) Errrr.... sorry about that...  Get a load of what he's proposing for the old grilled cheese: 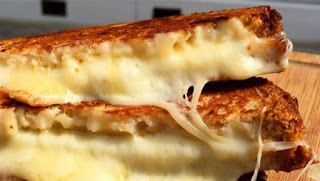 Seriously - go check out Kim's post!
Who woulda thunk you could upscale a simple grilled cheese?
I've been eating the velveeta/kraft variants for years and now I
feel deprived...

Boy oh boy - things must have really changed in Old Blightey. My parents were born to English/Scots immigrants and sometimes they made us eat as they had when they were kids. As a kid, I once got PTSD when mom and dad decided they were going to have a favourite meal from their childhood: boiled cabbage, and white navy beans cooked in a pot with a ham bone. JFC - I can still smell it, 50 years later: It was like - the mother of all flu farts that hadn't happened yet. Mixed with cabbage!  GAH! Right off the bat I told them I wouldn't eat it.

They told me about starving niglets in Africa. I said I would rather starve than eat this shite too.

They told me I would eat it or get a spanking. I'll take the spanking, I said, 'cause I ain't eatin' that shit.

Can't blame the folks, what with my ropey mouth and all - but I got spanked AND was forced to eat the shit. I still haven't forgiven them for it either, HAR HAR HAR!!!! HAR HAR HAR!!! I am told that that squalid meal was a much loved and seldom enjoyed treat for my parents. The vast majority of their meals were simple and boring. I think that is why they took such delight in this revolting fare - it was a change up from what they usually ate. In their day, they didn't have chocolate bars and candy - a kid was ahead of the game if he got an apple or an orange. I think I hurt my parents' feelings when I was revolted by food that they loved and cherished.

Yesterday I was lolling and shaking off the last of this flu and surfing around the YouTube gunnie vids when I cam across this charming gem:

Are chicken gizzards in yer salad-stuff edible?
This intrepid young man will find out!!!
And no, Ian - Brit rations were not the stuff of
picnics. You'll eat that Woodington pie, and you'll
damned well LIKE it too!!!

There's a series of six of these vids and I watched them all. Our boy starts off telling us that the war/ration diet wasn't all that bad. I think in the course of his weeklong experiment, he probably found out otherwise. For my ancestors, food was not something taken for granted - it was life or death, it was fuel and calories - and that's it! I wonder how long I would go before I ate a plate of boiled cabbage and navy beans? Oh yeccccccht!!!! BARF!!!

I'm gonna make a grill cheese sammich - pardon me, a "toastie" - and I will thank my Maker that I don't have to eat the same stuff my parents and grandparents did.

Have a good Sunday.