Well my last day of freedom was yesterday. I went out to the range to enjoy my last weekday shoot that only unemployment could make possible. Last time I was out it looked like spring had finally set in, but since then winter has decided to have another go at us. I had bought a bag of peanuts for the squirrels that live out at the club - but I forgot them on the last trip out and ended up eating most of them myself! I did manage to save a half bag for them though. 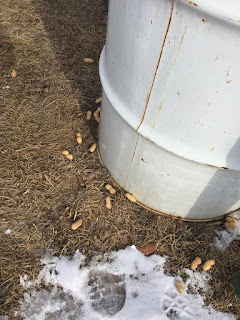 I scattered some peanuts round the garbages where the squirrels
tend to forage.
There were no takers today though. I told the range officer
that I was putting out bait with the intent
of potting the little buggers for a stew,
and he made some extremely rude comments about my marksmanship.
Gunnies are all a-holes.

I started the new job today and I am trying not to get too excited. But... it looks really good. You never know until you've been there awhile, but gawd knows, I could sure use the break after that last gang of chit heads I worked for. I won't have to travel, or wear steel toes or a lid anymore. As long as they treat me right, and I can afford bullets, beans and beer - it's all good.

I'm struggling with my faith again. I dunno if it's blasphemy, but reading Paul just drives me nuts. He sounds like a prattling, sanctimonious scold and that turns me right off. Can I say stuff like that? When I said it to the wife she gave me the stink-eye.

Christianity has also robbed me of the pleasures of schadenfreude. I'm a critical thinker, graduated from the school of hard knocks. So when I see stuff like that YouTube HQ office shooting - I just want to gloat in the worst way! What did those idiots think was going to happen when they start 'moderating' their content to the tastes of finks, bedwetters, and butt blasters? It was icing on the cake when the shooter turned out to be a vibrant vegan left wing carbuncle just like themselves. I want to laugh at them and tell 'em it bloody well serves 'em right. So it goes, same thing for another old blogger that I love to hate. He's a ropey mouthed old turd that loves to crap all over Christians and picks fights with people he shouldn't. The other day he was bitching about how disgusted he was with the world because it owed him a living, Christians are all a-holes, and people get all mad at him and unreasonable when he mouths off at them. Ordinarily I'd have some sport with a prick like that too - but all that is no longer permissible under the creed I bought into. Crap not upon those that deserve it, lest ye be crapped upon yourself! You're supposed to pray for them and let God sort 'em out. I suppose I'll meet 'em half way: I pray that those idiots that got shot up at YouTube all smarten up, buy guns for their own protection - and learn how to use them. I'll be happy if they just use some bloody sense when they moderate. And - gag - I hope that old sonofabitch blogger gets his meds right, or that God works a miracle for him so he'll just shut the hell up! HAR HAR HAR!

Hope you're all well, and thanks for stopping by. Have a good Friday!