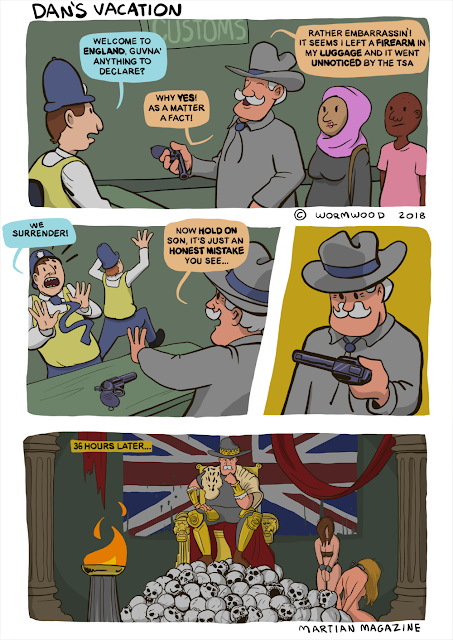 Maybe I SHOULD go conquer England with my Colt. 44...?

Couple days back the blogs n' news rags were all a-flitter abut how Londinastan is now more violent than Noo Yawk Fuggin City (or as the great and powerful Kim du Toit calls it - NYFC (Don't read Kim, he is even hateyer than I am.)). Civil war broke out amongst the punditry with half of them wondering (and incorrectly answering) the question: could these stats be a product of London's wonderful cultural diversity and vibrancy? The other half of the punditry invoked hexes by labelling their opponents as racists/homophobes/whatever/ad nauseum.

Kids. Kids! You're ALL idiots! HAR HAR HAR!!!!! HAR HAR HAR!!!! Let's be rational, shall we? Let's lookit the names of the victims and see if any patterns emerge. That's how adults would do it!

Hmmmmmmmmmmm. There's an awful lot a vibrants, kebabs and mudflaps on there. Yup - it just HAS to be racism!!!!  ;)

One thing we have to keep in mind about all these stats is this: the vast majority of violent fatal crime is not perpetrated against innocents. The vast majority of it is criminals wacking other criminals. So much so, that the case could be argued for subsidizing free guns and ammo for them, HAR HAR HAR!!! Lookit the list above! 2/3 of the vics, judging from their names, hail from distant shit holes! It wouldn't be a stretch to assume the racial composition of the perps was close, if not the same.

If you Yanks start screwing around with your constitution based on numbers and stats that don't mean what you think they mean - think of the doors that open: looking at stats like that above... we could reduce violent crime by imprisoning or deporting people 'of colour'. There is a far more solid case for that, than there is for blaming gun club duffers for the crimes of gang banging blacks.

Whatever. It's none a my business what the Kippers n' Yanks do to themselves. I pretty much ignore the gun blather here at home so I shouldn't be paying any attention to it elsewhere, I suppose.

I gotta job interview today - wish me luck and have yourselves a great monochromatic, non-vibrational and boring Tuesday!