I HATE it when I get busted doing embarrassing things like that time I got caught in the goat shed at Sunnybrook Farm like my eccentric literary tastes. 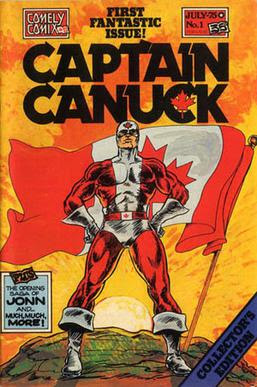 He looks like a fag.
Captain Sweatpants would make mince meat out of him.
Just sayin'.

A hundred years ago there was a rude YouTube where the dawg drags out the old lady's vibrator in front of her and her friends while they're over having coffee. I now know how that hapless young lady felt - when fuggin Quartermain raided my comic book stash and dragged this out to embarrass me with! He's always picking on me for some reason. (Can't imagine why neither). Quatermain must have an issue of that one because he says it wasn't that bad. I think I bought mine sometime in the mid-70's and I spent the year trying to trade that sucker off for something good - but to no avail. The cool kids decreed that Captain Canada sucked cack (and he probably did, given his publishers) - and I got stuck with it. Later in the 90's I heard the issue was fetching a couple hundred bucks amongst the geeks that collected comic books. This group of maladjusted young adult comic collectors would later become the first generation of adult cellar dwellers. But I digress. 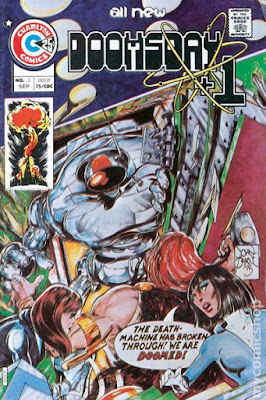 Now we're talkin'! Killer robots, bimbos and cavemen!!!
Proto-science fiction perfect for the snot nosed kid!!
This was one of my favourites as a youngster.

As a young fella I made a small fortune on pop and beer bottles. I blew the lot on comic books, junk food and toys. I was the first kid in my town to kill himself on a skateboard. When Mom and Dad found out I was saving up for a .22 they shat their pants because guns are bad, right? I ended up with a metric tonne of comic books instead. One day I got tired of trying to find space for them in my room and I threw out the lot or gave them away. I'll bet if I were able to sell that collection to modern collectors today, I'd probly have enough cash to pay Mad Jack's bar tab, HAR HAR HAR! HAR HAR HAR!!!

Most kids hit puberty and mature. I became even MORE immature and started reading some ghastly underground comics that weren't fit to wipe your arse on. 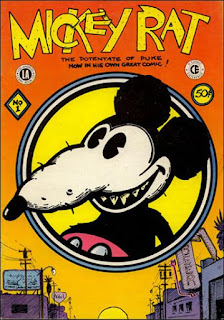 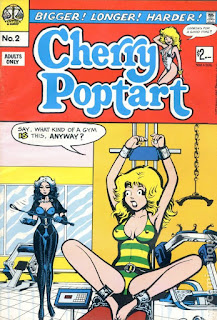 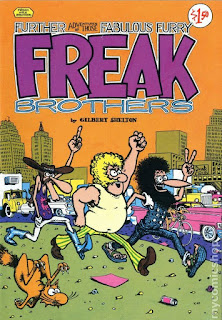 Hmmmm. Fat Freddy bears a striking resemblance
to an old friend of mine - leisure suit Larry.

Then I discovered girls and had to hide my more foolish and deplorable pastimes. Another tonne of comics hit the bin. All was not lost because I discovered that my girlfriend and future wife was an artist herself. I became an acolyte of Heavy Metal - because a the art dontchyaknow. 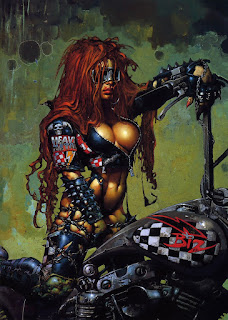 The comic book evolved into the graphic novel.
Every issue of Heavy Metal had spectacular artwork and some
not-so-perverted, nutty comics that were semi-worthwhile. 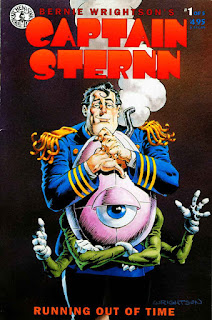 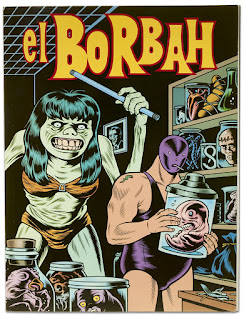 The kinetic art of El Borbah - a hard nosed,hard drinking detective (and professional wrestler)
that even world famous gum-shoe author, adventurer, and man about town -
WL Emery - could respect. 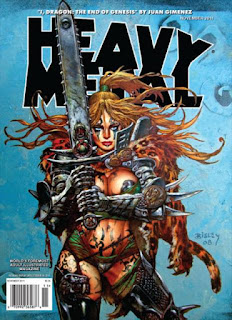 The girls are so cute when they're mad.

It's funny. Nowadays - I don't read books or comics at all. SF went for a dump when the pedos and homosexuals took over the genre. I'm old enough to remember reading the originals like Heinlein, Asimove, Bradbury, etc. I did read the spectacular Sandman series by Neil Gaiman or whatever-his-face was - but that must have been 5 years ago?

Today the comic books have gone the same way. The super heroes are all politically correct vibrants, sexual degenerates, Marxists and other liberal turdies. I've watched some of the movies and they are going steadily down hill too. They are so disgusting now though that even I can't stand them.

There's a ray of hope though. I've heard and seen some snippets of Vox Day's ignernt, hateful and most assuredly politically incorrect comic books slated to come out any day now. 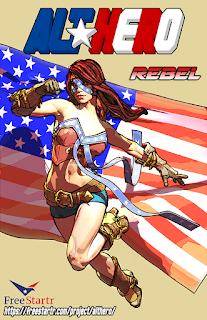 Apparently the Alt-Heroes are politically incorrect and
do nasty things like give the finger
to EU plutocrats, pound the crap out of violent illegal immigrants, smoke, swear
and worry about justice rather than social justice.
It's a great concept - heroes that actually do the
right thing to the right people that deserve it.

I might have to start picking up pop and beer bottles again. Hmmmm - anyone see which way Jack went...?