There's a small rural school about ten miles out of town I fly at. I go out there and shred the deserted playgrounds with my RC crapcopters - where there are no witnesses to my incompetence as an airman. I go in the evening when the sun is going down and the winds are calm. I park the motorcycle and leave the stereo on - and enjoy the peacefulness and serenity of the night and the music - while fighting hair raising battles at the controls of my heavy metal air machine!

On the way home I saw something that reminded me of my home long ago... and stopped to take a pic. 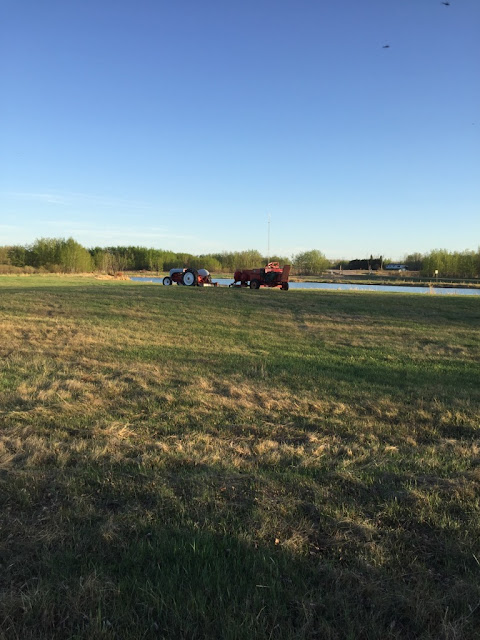 What a crappy pic. I need a better camera.
When I get my act together I will use the crapcopter to
take better ones.

A little farm tractor with a baler out back with a small slough in the background. The grass, the water and the warmth took me home to our little hobby farm light years ago. Pop had a little 1964 Massey Ferguson farm tractor. Behind that would go the baler - like this one. There aren't that many square balers around anymore but back then that was all there was. Behind that was the stoker where I would ride. I would grab the bales as they came out, throw them on the stoker - and sweat and curse hour after hour. It was always hotter n' hell, and you had to wear full work gear because the bales would shred you like graters if you didn't. Pop loved bringing in the bales and farm work. I hated it - I wanted to be in the city chasing the girls. A couple dozen trips round the sun later... and part a me wishes I was back on that baler and sweating like a pig. I don't think I could do it now.

The first cut won't be coming off till the end of June form most of us - so I wonder what made this guy drag the baler out?