FridayCanadiana: All Roads Lead To... Tranna???

Tranna is Canada's answer to NYFC (New York Fuckin' City - as it has become known to my tribe). It is a veritable den of sinners and sodomites of every description. It is a politically correct cesspool of ethnic racists and mystery meat races, with your garden variety carpetbaggers, criminals and thugs thrown in for spice. It is a sanctuary city for stupid people. It is what you would expect of a city that is a bastion of liberal lunacy.

One of it's features is the infamous 401 highway. 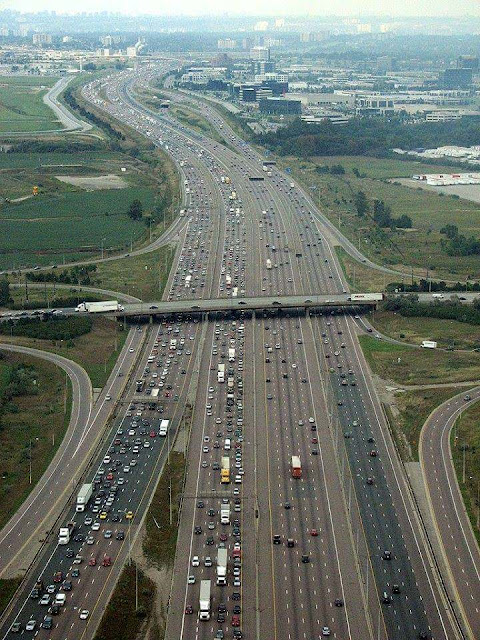 Stretching like a sewage pipe into that pestilent urban
sprawl.


Lookit that monster. That road is a monument to human stupidity, and an insult to the road building Romans that strung Europe together. It's a straight line!!!!!! And yet, at any given time, with all those lanes - at least half, and sometimes all of it is backed up or grid locked, because the idiots driving on it can't even handle a straight line!

They drive like animals on it too. People will literally kill you to get a half car-length ahead and you have to drive aggressively on it. The first time I saw it was from an airplane and back in the 80's it was the size of 7 or 8 Edmonton's. Being a farm kid, looking at all that humanity unsettled me.

It's easy to see why these big sprawling cities produce the kind of people they do. Leading any kind of normal, healthy and wholesome lifestyle in a city that large has to be well nigh impossible.
Posted by Glen Filthie at 05:45