Muskeg: Tales From The Timberland 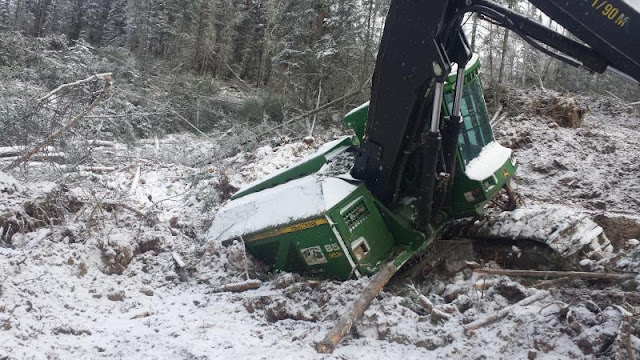 The story is urban legend now.

Someplace out west of Largehole Lodgpole, definitely west of Dreadful Valley Drayton Valley - a pipeline/seismic/forestry company was running some big Cats out in the muskeg deep in the bush. The story when I heard it was that they were D9's, but - what're they up to now? D12's? It changes depending on who's telling this whopper. It goes that the boys were out in that sordid mess, working with the heat and the flies that bite like chainsaws when one of the big Cats got stuck. The guys that work in this country don't worry about getting stuck out there - it goes with the turf. EVERYONE gets stuck in muskeg country. Even I have done it on an ATV... and those things are built to traverse crap like that!

Our man in the Cat got on the radio and the foreman cursed and sent out another machine to get the first, furious at the cost but mindful of the fact that it's the price of doing business there. Awhile later the radio goes off again - the second machine got stuck trying to rescue the first. The foreman lost his mind. In a rage, he sent out the remaining TWO Cats in his fleet. The idea was that together, working in tandem, they would rescue the second machine, and then with three - working in concert - they'd free the first machine. A short while later ALL the machines were stuck, and none of the other operators would volunteer to help at this point. The legend goes that all the machines were written off, and that they are all still out there today, rusting away. Some say the company was ruined, others say the insurance picked up the tab and they all lived happily ever after.

From my experience in that muck with quads/ATV's - I have seen guys get so thoroughly mired that nothing short of TNT and road rage will get them out. I can see the muskeg eating a big Cat no problem - I just wonder about the intellect required to send a heavy metal monster like that into it.

Is the story true? Who knows?
Posted by Glen Filthie at 18:02