You know the rules: name them all, no cheating! I'll go first! 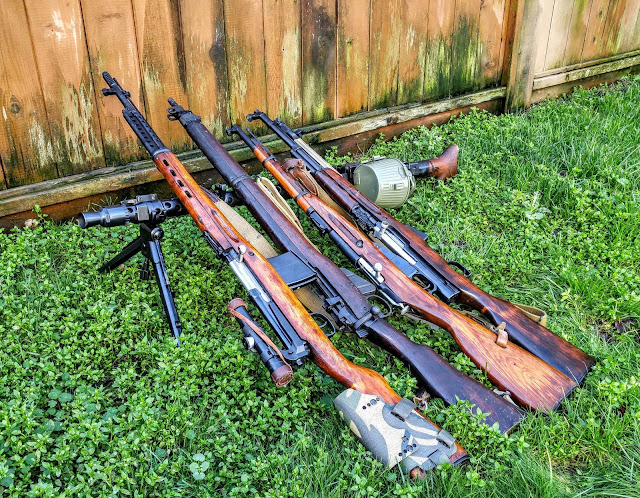 Dammit. What's that first one? That Russian POS? MVT-40?  (Anyone ever shoot one a those?)
Lee Enfield...Mark 4?
Russian Mosin-Nagant
Russian (or chicom, or Finnish?) SKS
And... the machine gun... German MG34?

The Russian milsurps are going for peanuts up here in Canada. You can buy bulk ammo for them for less than it would cost me to reload it - assuming I could get decent brass. I think most of it is steel cased I think. All I know is that Old Jim at our rod n' gun club curses it because it is apparently non-magnetic, and the poor old stubfart has to bend over to pick it up off the ground rather than using a magnet. At his age that is a big deal - but he does it and cleans up that crap that kids half his age won't. When he goes at it I help him and we yak and chat and BS and before ya know it, the line is clean again and the old boy is happy. I dunno how many more years he has in him as the self-appointed range custodian... and I don't think people realize how much work he does around our club. He's become a much loved fixture around the gun club that folks tend to take for granted.

Today I am going to stop by church for the wife round mid-morning to get preached and speeched at, and after that I will head out to the range with my percussion guns stashed in the murdercycle. This time a year Old Jim holds court in the repair shed at the club. He backs the club UTV's out, the old farts move in with their coffee, lawn chairs and coolers - and bloviate the summer afternoons away. I might join them for a bit, they appreciate the company. Gives them somebody new to yak at, I suppose.

Have yourselves a beautiful summer afternoon - and say hi to your volunteers for me too. :)
Posted by Glen Filthie at 07:07