Rosanne Gets Un-Personed And Hurled Into The Void

The only mistake Rosanne made was in apologizing. It's easy to do when you get surprised by adults acting like children. And of course, because liberals are petulant children - she was excommunicated and exiled as a warning to any other Hollywierdos that might dare to speak against the interests of The Hive. Same thing happened to me years ago when I dared to notice that queers are not healthy normal people living a beautiful alternative lifestyle. 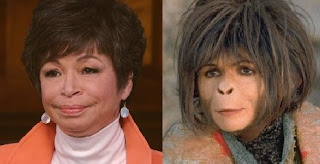 Courtesy of The Filthie Feral Irishman:

Of course it's obvious what's really going on here. This isn't about racism, it's about politics. If I understand the situation correctly, the show she was bringing back promised to NOT to be the usual  social justice propaganda, and it showed promise of being popular and making a buck. Can't have that, can we?

We saw the same thing up here in Canada awhile back. CBC was hyping a new 100% Canadian television sitcom that was gonna set the world on fire - called "Little Mosque On The Prairie". It very well could have too... but the writers for the production were the usual assortment of old dumpy liberal cat ladies, sexual degenerates and vibrant cultural ethnics. The show went with sensible and clean muzzies living in the hell of rural Alberta surrounded by stupid, kadiddlehopping white  farmers. Of course it flopped because it was about as funny as drying paint - and it got cancelled.

The Z Man recently noted that this is what leftists do: they get into these once-great organizations and take them over - and promptly destroy the things that made them great. They become boring, dreary play-houses for social justice warriors to police the thoughts of the members - and people start to leave.

I don't watch TV anymore. Won't bother with Twatter or Fecesbook, I'd only get banned the second some  white pasty faced SJW got offended on behalf of moslems, queers, or vibrants. I see very few movies and buy very few books. It leaves me with a thirsty spirit - I would love to be entertained again. I'd like to read a book or watch a movie that was about entertaining the audience rather than lecturing and hectoring it.