When We Were Kings: Manly Rituals

Dogs sniff each other's bungholes to establish friends and enemies. Men generally try to avoid that, but sometimes are forced to as well, as in the case when some idiot chits himself  amidst his fellows and thinks it's funny. (I am above such contemptable behaviour myself, of course! HAR HAR HAR!!! Whoever smelt it, dealt it! HAR HAR HAR!). Pull my other finger, Quartermain...? It has bells on it!

One of the deeply missed rituals of my youth is the tackle box thing. Whenever we went fishin' the first thing we did once we got settled was go through the tackle boxes to see what the other guy had. We would agree on the usefulness of certain lures, argue about others, and point out the dogs and losers we would never buy again. (Of course, here in Alberta most of our lakes are sloughs rather than lakes, and Pike will bite on anything. They are the hunter/killers of the Albertan fish species and will eat everything else right up to and including each other, ducklings, and other game fish). 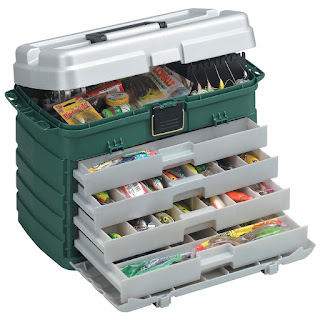 That's not a tackle box. That's a filing cabinet, or a cosmetic kit
for a gear queer who shops at Chinamart. 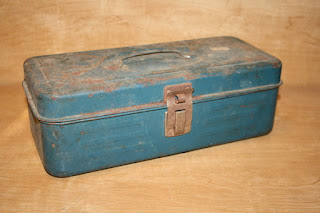 There ya go! Now yer talkin! A real angler knows what fish he's after,
and only takes the lures he needs for the job.
There's tons of room in there for lures, a quart of lubricant or a thermos of coffee, a sammich,
and a pack a smokes.

After a frootful discussion about lures, whoever was pouring would extoll the virtues of his preferred lubricant. We seldom got pished on the water but we were always well lubricated. Then the discussion often turned to the tacklebox itself. Often they were battered, treasured heirlooms of mighty sportsmen that have either retired or have passed on to Valhalla to fish the big waters. After the bullshit lectures were over - a companionable easy silence often settled over us. Some of us were fortunate enough to have sons, and a few were blessed with ones that would later become fine sportsmen in their own right one day. Our days were sun drenched and happy, as we smoked and sipped on the water, kings of all around us.

What asses we were!

I don't have a boat anymore and all my fishin' stuff went with the boat - but I still miss those days. I'm feeling my age often, lately. I think I may have quit drinking, I have quit smoking, and getting up early, fuelling up the boat and packing for a weekend trip ... just feels like so much work rather than fun. The lakes have been taken over by watercraft, inboard and jetted monsters towing water skiers and blaring rap crap from the stereo. Used to be a guy could get out on the water early when it was smooth as glass, do his fishin' and get off when the kids woke up and came out with the big boats... but not anymore. It's all changed, there are just too many people out on the lakes now. I've even seen road rage break out at the boat launches. 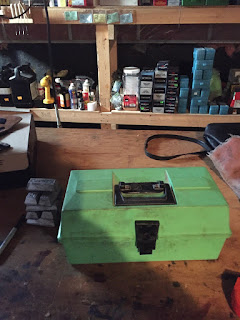 Filthie you ass hat! Didn't ya just say plastic tackle boxes
from ChinaMart are
for queers and poseurs?!?!

Light years ago that green POS belonged to my wife's youngest brother. Today it's covered in oil, old fish guts and dust, and has been repurposed as a gun cleaning kit. When the boy passed away due to heart problems in his teens, his heart broken father was stuck trying to disperse his son's meager possessions. He didn't like me, but I was his daughter's husband and it was just a tackle box, so for some reason he gave it to me. That was back in the 80's when we still made a half-assed efforts to get along with each other. It even has an el-cheapo pistol cleaning kit in it my mother in law picked out for me one Christmas back when we were a family. If my life runs according to the ones led by my moral and intellectual superiors and elders at the rod n' gun club - I will probably start giving my stuff away in another ten or fifteen years.

I'd be just tickled pink, if I could look down from the next Realm on this one, and see some foolish ass hats in this world telling whoppers and lies about me as they fished in the sun. But the world's moved on, and I am content to sit back and watch it go. That green tackle box will just end up as another piece of flotsam or jetsam in a landfill somewhere, a meaningless relic with stories in it that nobody wants to hear anymore.

But for now, it is a reminder to me of better times, when we were better people.

Have a great Thursday.