Owning The Insult: A Musical Retort


Back in the last election, a dumpy old harridan in a muumuu was running for election to the office of the President of The United States. The lickspittles in the media were definitely in the bag With Her and had forcecast an election victory probability northward of 90%. Her political opponent was some old orange skinned fat white guy - and everyone hates old white guys, right?

But then the gaffs started. While the press took no notice, the disrespectful simians on the internet roared with derisive laughter. Her best was one in which she accused half the country of being a 'basket of deplorable racists and homophobes'. Wanks from one end of the internet to the other proudly proclaimed "We Are All Deplorables Now". Pepe The Frog became the detested and unwanted mascot of the Democrat bid for the presidency. 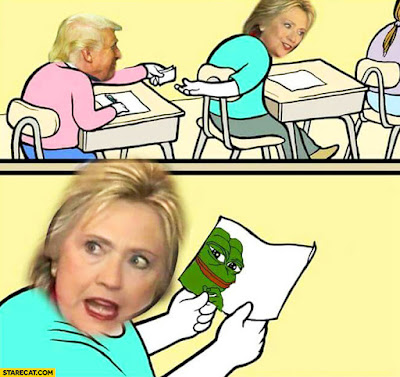 The really nasty (and funny) ones have now been purged and scrubbed from the internet.
Can't have any hateful statements about women from
the peasants now...

Liberal heads exploded across the nation like popcorn. The response from the internet was apologetic, and the wanks proclaimed "We Are All Racists Now". HAR HAR HAR!!! HAR HAR HAR!!

A new form of political warfare came arose that destroyed the  political cartoonists and media slobs who had previously used ridicule with devastating effect. Suddenly their political enemies turned the tables on them with something commonly referred to by Dirt People as the 'meme'.


One of the best guys at owning stupid insults thrown out by stupid people is the Z Man. His fans follow him on spreaker, oy-Tube and other venues. Some use Hitler phones, others are Android commies. The man has thoroughly RUINED music for me - whenever I hear 'Girls Just Wanna Have Fun' I start cackling like a loon, thinking of his scholarly lectures on "Xirl Science" where the lead in to the lecture about transgendered, poly-amourous, multi-spritied - is the quirky tune from Cindi Lauper. (That song sucked back in the 80's too, BTW).

But his trademark retort to the inevitable accusations of racism and fascism from the usual morons was the concluding music of his podcasts. Now I go around work singing this merry tune to the utter rage of the office feminist. I can't help laughing when I hear this tune now too.


Put on your Hitler Youth uniforms everyone! And sing along!
HAR HAR HAR!!!
Errr… I ever so dearly hope that no snowflakes were
triggered by this display of contempt and humour....!!!!

Tomorrow is Saturday - and it does indeed belong to you. May you own the months and years ahead as well. Have a good weekend.
Posted by Glen Filthie at 17:28