That One Cuts Both Ways 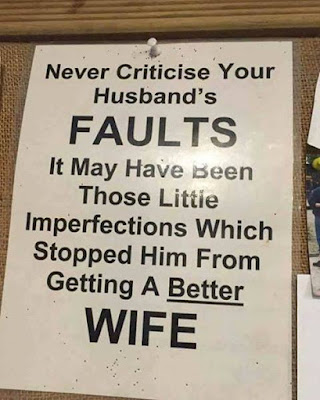 Suppose that one cuts both ways. But the stats I heard went something like this: 40% of all marriages end in divorce. Of those 40% of failed marriages - the woman in the marriage instigates 80% of them. I dunno how true that all is, it's just what I seem to be seeing on the internet. The stereotype that goes with that is that the fella goes to the cleaners and the lady goes to the bank: she gets the house, the car, the kids and the bank account and the fella gets the finger.

In point of fact though, that is not what I am seeing. Women that give their husbands the punt (that I have seen) are often one step away from poverty. If there's kids involved they are often haggard and tired as they try (and usually fail) to do the work of both parents, and they end up as lonely cat ladies. Or they have these odd non-relationships like my next door neighbour. He's was fairly well off until his divorce - but he did escape with one of his properties - the house next to mine. He is seeing a divorced lady who cashed out of her divorce with the house. They've been seeing each other for at least three years now - but they still live apart in their own homes. I dunno if I am misreading it, but I wonder if all they get out of that is keeping the loneliness at bay?

Why would ya want to live like that?
Posted by Glen Filthie at 05:51