A Harrowing Day On The Range


Yesterday I headed out to the range dressed in my snugglies. But the weather gods smiled upon me - it was brilliant sunshine coming down, and the snow reflected it right back up again and I just smiled and basked in the middle of it! Days like that are a real treat in a gloomy, overcast month like November! I had to shed a few layers to keep from roasting.

A young fella made the mistake of pulling into the range that I had entirely to myself, so I decided to go over and harass him and make a nuisance of myself. 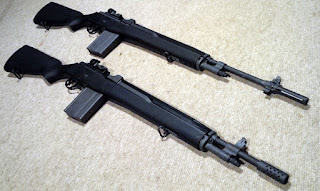 He uncases a brand new Chinese Norinco M14. These things are another controversial gat amongst us gun geeks. They look great, and a lot of the owners that have them do really well with them. Apparently they are made on the same machine tools the originals were - the Chinese bought the tooling when the military obsoleted the M14 in favour of the M16 back in the 60's. A lot of the lads out here have them and they are businesslike rifles. A few of the lads have had nothing but problems with them. I bought a used one and kept it for a month. Mine apparently had been made in The Year Of The Monkey, and the cheap pot metal sights wouldn't hold a zero. (The original M14's were legendary for their fine sights). These guns may have been made on Springfield tooling... but they are being made by chinks. There is no nice or politically correct way to say it.

Chinks are predatory and dishonest by nature but they're pretty smart too. Being Canadian I've dealt with them on and off for years and my impression of them is that there are some products they are good at, and some they absolutely suck at. If you think you can protect yourself in dealings with them by demanding mill certs and QA/QC documentation - think again. Those slant eyed little bastards will be happy to supply you with the documentation... and it won't be worth the paper it's printed on. To be fair, some Chinese firms wised up and understood predatory dealings like that don't fly well with westerners and Euros and have cleaned up their acts. Others are stamping out junk as fast and cheaply as they can. They'll kill their own people to do that - so they won't give a damn about western consumers that get hurt using their products. There are some really bad reasons their products are so much cheaper than ours.

I told the kid that I had had one once - and then went upgraded to a Springfield. You don't shoot your face off to a kid that is proud of his new rifle. So I left him to his shooting and got back to mine. He shoots a couple and stops and starts fiddling with the gun. I go through a couple mags on my AR, slow fire all the way... and take a break. The lad is still fiddling. So I mosey on over to see what the hang up is.

"It's weird," the kid says, "I fired the last shot, it locked back and won't go into battery again..."

"Mind if I take a look?" I said. So he passes it over and looked okay at first glance. So I frown and take off my glasses and just about put my beak in the action - and I notice it. "Where's the bolt, son?"

The kid shrugs and goes, "What?" So I tell him that when ya take apart the gun, ya gotta put it back together again. He looks at me like I'm stupid, I'm looking at him like he's a retard... and then I go grey. "You didn't take it apart, did ya?" The kid shakes his head, no. "Hold up your hands," I said - I want to make sure you still have all your fingers...". The bolt had sheared away during the firing cycle and God only knows where it ended up. Sometimes when guns come apart on the firing line they embed their fragments in the shooter or worse, some other poor slob down the line. The boy's gun was brand new.

Right now those things are selling in Canada for about $600~700. Your average outhouse Springfield is almost three times that. There is a reason for this price discrepancy. We've been shooting Norinco guns up here in Canada for a lot longer than you Yanks have because our leaders are commies themselves, more often than not, and they get along with the chinks. I've shot Norinco M14's, I owned one myself for a couple weeks, and I personally believe them to be junk. We have smiths up here in Canada that make a living out of refurbing and upgrading chink M14's. They make good guns - but you pay for that. You can build the Norinco into a match gun, if you're so inclined, and from what I have been able to gather, you can save as much as $300.00. But consider: you pay for freight to send the gun to these smiths, you have to wait for them to eat through their workload to get to your gun - and many of the upgrade accessories for them involve wait time too. It's pretty easy to spend more on upgrading a Chinese M14 than it is to buy a Springfield.

When I bought my Springfield it came with a pile of instructional material and American QA/QC documents. It was fired and tested at the factory and the guy that did it signed off on it. The guy that head spaced the rifle signed off on it too. Mine is chambered for the Winchester .308, not the military 7.62 NATO. Lots of people will tell you they are the same but they aren't.

Handloading for the big gas gun is different too. You have to watch for chamber and port pressures or you start bending op rods and doing damage. Reloading for these things is not like reloading for your bolt gun. If you aren't familiar with it - don't even think about buying one until you've checked in with the guys at the M14 forum.

As far as the Norinco guns go - I am no longer going to recommend them. I think a guy is better off in the long run to just bite the bullet, pick up a Springfield - and do the research and legwork that go along with shooting one of the best rifles in the world.
Posted by Glen Filthie at 06:38