One a the radio stations is already playing Christmas songs. I can take one or two carols and then I have to flip away to another station. Bah! Humbug! Christmas used to be a tough time for me because both our families were obliterated in the early stages of the culture wars. We will never be family again, and that means Christmas will never be Christmas again either. For me it's now just a couple extra days off, and I spend it playing with the dawgz, eating too much, and hanging upside down from the roof of the man cave downstairs. I am going to do a deep dive into the Old Testament this year too. If my wife can think of someplace she wants to go, or something she wants to do - we'll do that too. Christmas is pretty much for young people I guess. I will probably cover at work if any of the kids need time off too.

I am enjoying one aspect of the culture wars though. It looks like they finally lost that battle to criminalize the act of saying 'Merry Christmas'. Or maybe that one is still hot - I don't care; the people I hang out with are smarter than that so it really isn't an issue. But - no Christmas would be complete if I didn't take at least one stab at the politically correct beast that has consumed our nations and families. 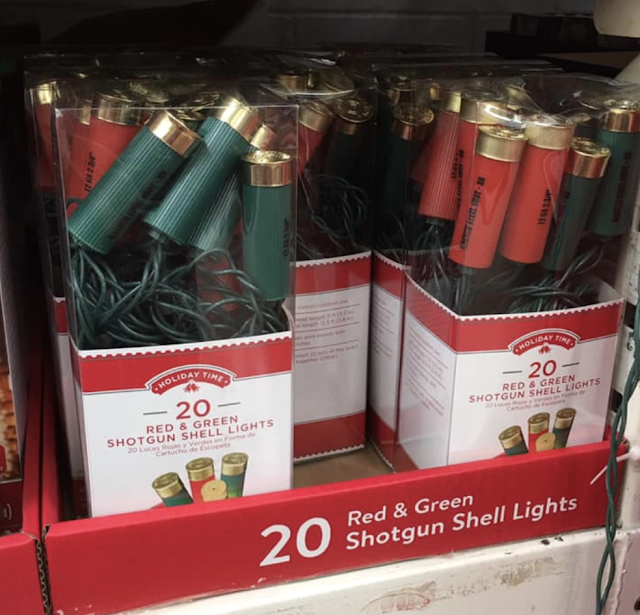 Oh be still my beating heart! Why, these are even better than my tasteless fish Christmas lights! I used to have a string of perch or wide mouth ass fish lights on the tree that made me smile - until they disappeared one year. I'd suspect my wife had something to do with it, but I can't prove it.

In any event these festive shotgun shells would make an excellent replacement! But... hold the phone, here it comes! 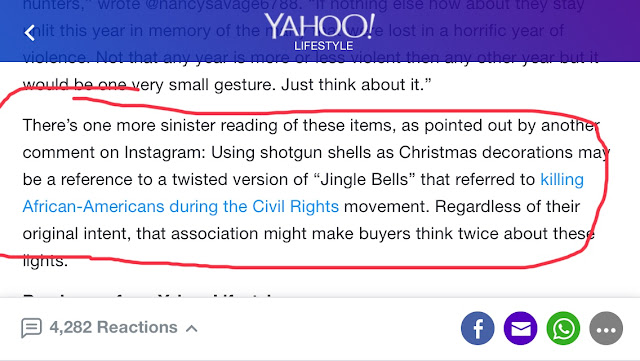 Oh yeah. I'm gonna buy a ton of these now. And if some chitlib femcnut has a problem with it I will sanctimoniously point out that the lights come in two frooty colours of the rainbow, HAR HAR HAR!!!!

Seriously, take extra care this holiday season. There's a lot of serious chit going on out there that can divide us. When it comes to politics keep your lip zipped, and make them do the same. Try not to let this be your last holiday season together. I realize this is one of those 'do as I say, not as I do' moments... but there it is.

Have a great Tuesday. Better get after that Christmas shopping if you haven't already done so.