Chili was invented by Mad Jack's ancestors in the 1850's when they discovered that the deserts and arid portions of the country were just teeming with delicious animals that could be made into savoury stews and chilis. The structurally reinforced ceramic toilet was invented by my ancestors in the 1860's when chili came to Canada and conventional outhouses failed when chili consumers developed containment issues. 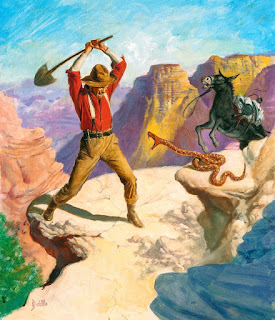 Little bit a hot sauce, stir in some pinto beans -
and you are cookin' with gas!!!
Jack's Copperhead Chili is to die for.


Earlier in the week one a the girls decided that we all needed a 'Chili Friday' and the manageMINT agreed. Now I love women - but the ones where I work are less than optimum examples of the breed. The worst is my boss - she has a … a.... *ahem* a hair issue, face jewelry, nose rings an tats - and the mind of a child. Our gal behind the chili extravaganza is a 40 year old punk rocker, and the last one is a divorcee with spending issues and would be right at home in the trailer park with Ricky, Julian and Bubbles. All week we were regaled with how great Amanda's Vegitarian Chili was and I resolved to eat some of it an be polite afterward. I didn't give a damn if it was full of (ulp) egg plant and zucchini - I would eat it and be the picture of couth and class afterward even if it killed me. In spite of their obvious mental issues I love those young ladies as they struggle to become rational adults. I hope they make it - I know I never did, HAR HAR HAR!!! 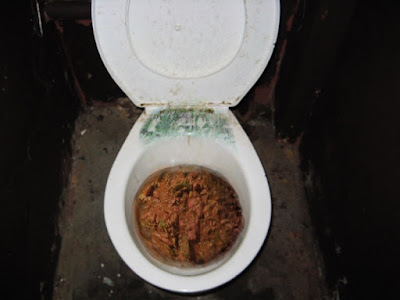 Vegitarian Chili: you'll eat it and you'll LIKE it,
goddamyoualltohell!!!
Fortunately Amanda made a crock of regular
chili as well.

During the meal Karlie regaled us about tales of how stupid Americans are. Unbeknownst to most Americans is the fact that they are absolutely hated by the Canadian liberals. Our liberals are worse by far than American democrats because Canadian liberals are so goddamned dumb they think they're smart. Then Karlie launched into a speech on what a bunch of a-holes gun owners are.

I must have changed or something. Maybe time away from the constant bombardment of liberal dogma and boilerplate idiocy has allowed me to replenish my resistance to such bullshit - I'm not kidding ya - it didn't bother me one iota! I started a discussion with the Token Pakie and the trailer park queen about weekend plans on the other side of the table.

Guess Matt got tired of Karlie, so he interrupted. "What are you doing this weekend, Filthie?" I didn't even hesitate. "I'm going to the range. I have an M14 that is giving me a hemorrhoid that I gotta deal with. Think it's the scope mount..."

"Like - with guns?" Matt asked. So I started explaining about my masochistic fetish for black powder guns and gave an impromptu speech about military match guns. The girls were slightly embarrassed because they like me and now had a decision to make: how to deal with this old heretic in their midst?

Amanda saved the day. "Will somebody at least try the Vegitarian Chili?" I told her that I would have loved to, but gosh darn it, I had just eaten too much of the delicious regular chili and was stuffed! And with that, I was able to make a dignified escape.

Sometimes I think that we may just get lucky and evade the looming civil war. Who knows.