Putting The Boots To The Chinamen

Because Canada is run by retarded socialist meat holes - we (as a nation) tend to get along with China fairly well and I suspect we see even more of their products in our markets than you Yanks do in yours. (We have the economy to show for it too) (and it serves us right as well)).

My experience in my limited dealings with their products is that it is really good - or really bad  - and no in-between! The chinks are dishonest as hell to boot. If you tell them you want your purchases to be of a certain standard or specification - no problem, you round eyed devil! They'll put in a piece of paper that tells you what you want to hear, and you will take them at face value thinking that what they sold you meets API/ASME/CSA/CEC codes and regulations - and find out later that the little yella bastids pulled a fast one on you. 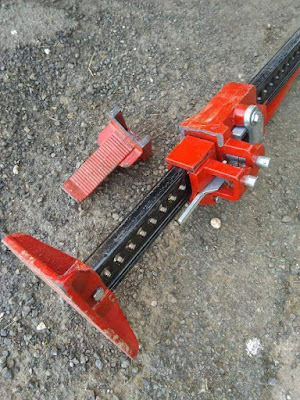 That looks to me like your standard
North American Jack-All.
Except for the break, mind you...

These were a dime a dozen when I was a kid and could be used to jack anything from heavy farm implements up to and including army tanks. Those things DID NOT BREAK. I will bet you a dollar to a donut that this jack came from China. How would you like to be under your car when this POS let go?

To be fair, the Chinese QA/QC and product quality is going straight up. The time will come when those guys are putting the Euros, Yanks, Japs and Koreans out of work - but they are probably going to kill a lot of people first.

Like many - I learned that in just about everything - you get what you pay for. For now I thank my Maker that I don't have to rely on Chinese made junk.
Posted by Glen Filthie at 18:19