Yesssssssssssss…. yessssss my precioussssss. We will kills them allllll…..

Oooops!!! Did I say that out loud? Why, excuse me! I didn't realize I had company! Hey - Thanks for dropping in!

Awhile back the Bayou Rennaissance Man and his elderly cronies were screeching and carrying on about weaponized toy drones being used by the bad guys to bomb and maim servicemen deployed in the various third world shit holes round the globe. Of course it was all nonsense and I pretty much proved it. There isn't an affordable hobby drone on the market capable of lifting the ordnance required to mess up a poodle, never mind a Marine. I did a scholarly lecture and ran a practical experiment and when I presented it to the geriatric symposium of elderly intellects - the miserable miscreants ignored me. Or they hooted with derisive laughter! At me - the world's foremost Crapcopter pilot!!!

Aesop will be the first to die: Using a proper microdrone for the job, I will silently fly into his house and use the drone to drop 500 mg. of Viagra into his Metamucil when he's not watching. When he takes a drink to restore his regularity - BAM! He'll get a chub on so hard the cat couldn't scratch it! It'll go up through the bottom of his chin and out the top of his head - and no one will suspect that I was the author of his demise. I will hunt them all down, one by one, each dying more horribly than the last.... ooops!!! I'm talking out loud again, aren't I?

Let us turn from my rage filled invective to something else - that I refer to as The X Project! 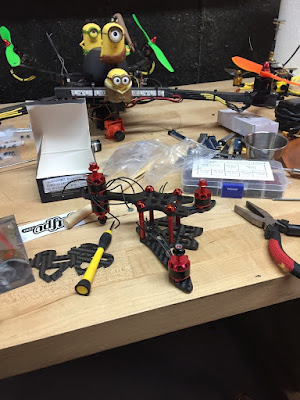 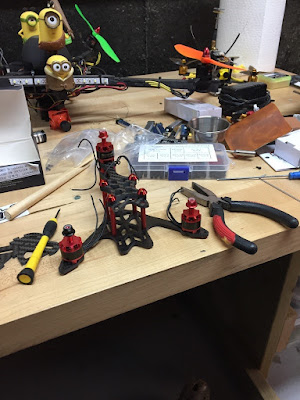 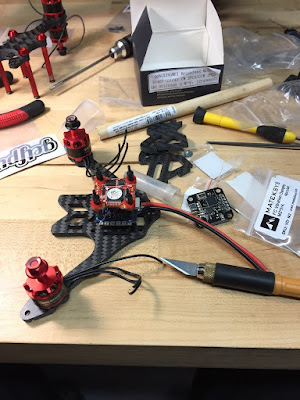 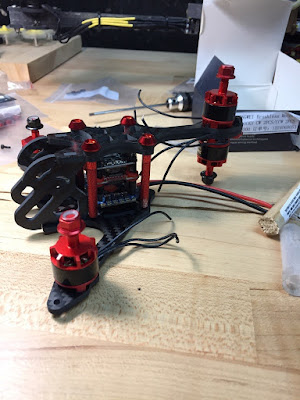 This drone is what is called by Rotorgeeks the Y4 configuration. All my other Crapcopters are X drones and use the Arduino based 30x30 mm PID flight controllers. I used to sell much less capable variants into the process and control industry 20 years ago for about $1200.00 a pop and there was no way in heck they were fast enough to run something like this back then! Nowadays, the controllers  are so fast that even an aerodynamic abortion like this can fly and the F4 coprocessor has speed to spare for telemetry and data acquisition chores. And they cost about $40.00. The flight controller on this one is one of the new crispy mini PIKO F4 with the even smaller 27x27 mm footprint. The tolerances on this little monster are zero. All my wiring has to be clean or it will end up in the props. It's going to be a very challenging build. All I need now is a camera - I may salvage the one off Crapcopter I and use it on this one... or I might opt for the smaller and more modern new Runcams.

It will be slow, fiddly work from here on out and by the time I get it done I'll probably have forgotten why I built it and who I was going to attack with it. Oh well - it's a good way to stay busy and off the streets and out of jail during the winter, and an amusing toy to play with at roadside stops on long motorcycle trips.

Have a great Saturday boys - and thanks for stopping by.
Posted by Glen Filthie at 14:43