The Filthie Pyro Part One


Like most Albertans and Texans I know my way around a BBQ: ya put meat on it and burn it to a proper texture and you're good to go. I know there are artisans and chefs that can command a grill to the tastes of soy boys, vegans and eastern Canadian flimps and they are welcome to their posturing and preening. I can and have cooked over a wood fire and my wife is even better at it.

Be damned if I can keep a BBQ going though.

It drives me nuts. First - no way am I going to propane or natural gas. Screw that! I don't care how convenient it is, I don't care how controllable the heat is, hear me - I don't care. That leaves wood and charcoal and I am just peachy with it. But - every BBQ I buy dies before its time. It ticks me off, I've probably shelled out over a grand over the years for crap that falls apart after a couple years! Grrrrrr! Now I am hopping mad because my Traeger wood pellet BBQ seems to have calved after only two or three years. Bastid thing!!!

There's a time and a place for cheap grills, when I was a kid Pop brought along cheap Hibachi BBQ's when we went camping and they were made out of cheap pot metal. At the end of the season they were pretty much done and he'd just pitch them in the garbage and buy another one the next year. Then for some reason they stopped making them - I think it was because the campers started going to cheap propane BBQ's.

I was in Cabelas today and happened to score one of these: 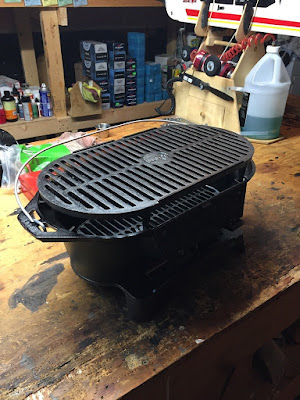 It was over 200 beans Kanukistani, and it's made out of heavy cast iron. It's low tech, it's small so I can bring it in and store it when it cools off and not leave it out in the elements. We'll see how it makes out, I suppose. Two bolts hold the fire bowl to the stand - and the rest just falls together.

It should make for some interesting camp cookery this year if nothing else. I'll keep ya posted.
Posted by Glen Filthie at 14:38