That was the scene 30 years ago, and I was trying to buy one of these: 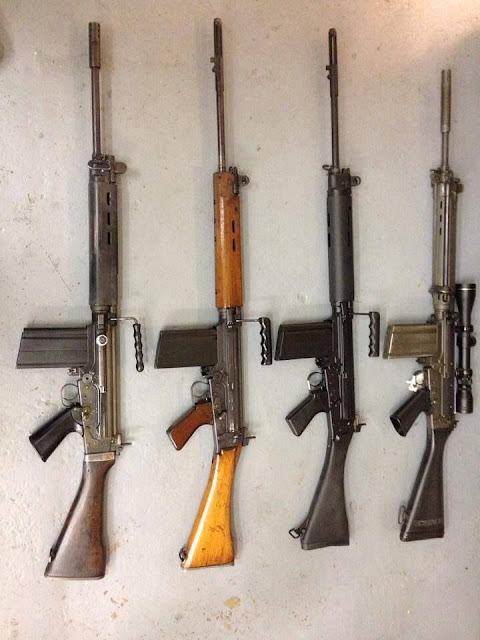 The owner refused to sell me one because it was a copy made in Ishapore or Sandratistan or some other third world chit hole - and was priced accordingly. His opinion was that the gun was a wall hanger for the man cave, or a paperweight. He would sell me a shooter, but he knew a young shooter would never be happy with what was essentially a curio or relic. Shop owners used to take care of their clients like that in the old days.

One of the other regulars piped up and agreed, "Even the better ones from FN were fuggin junk, Filthie" he said. "Oh, stuff it, you old half-wit! It's a great gun, kid - I shot one during my military days and it hit what you were aiming at every time if you did your part...". Another fella piped up and said they were hands down better than the M14. There didn't seem to be any consensus on these guns in those days and it still seems to be the case today. I dunno if they even make them anymore.

I never learned which side of that one I would fall on, because our fart sucking liberal gov't and their canary legged lickspittles in the RCMP banned them. I haven't seen one in years.

There isn't much detailed info on them either. From what I've heard these are old world guns all the way. If yours was fitted by true gunsmith that knew his way around the platform you got a good one. If it was put together by some smelly arab or filthy pakie in the third world - you got a junker.

For what it's worth, when I go medium bore I go with the M14 (M1A)… But it would be nice to have had the opportunity to try the FN FAL out for myself.