This Is Why The Daisy BB Gun Was Invented 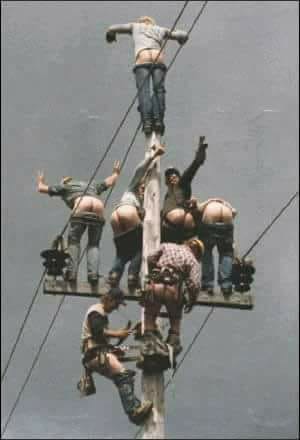 My big bro was a lineman. He just retired last year. Yep, he's doing the Freedom 55 thing. He started with the company at the age of 18 and never worked anywhere else. When he started back in the early 80's, he was your typical boisterous young union slob and would have been right at home with all those arseholes up there.

Then the gov't utility got privatized, and a lot of those mouthy union types were given pink slips. The old dead wood was pensioned off. Then the strikes started happening and things got REALLY nasty. He shocked the hell out of me when he actually crossed a union line to go back to work. I was shocked at the morality of it, to be honest. Those slobs were striking in the midst of hard times when the rest of us would have given our left arms just to have a job. The union lost that confrontation, but those guys play hardball - big bro was persona non grata among guys that were formerly his friends. The company did right by him though - and promoted him into management. Now he was stuck dealing with the same arseholes that he himself used to be. The second he was eligible, he cashed out, took his pension and retired.

Big Bro went through the same liberal family wringer I did but from the other direction. I think the experience changed him. He became quieter, angrier, and less sociable. Jeez - who does that remind me of?

When I retire, I think I am going to be a hermit. I might learn to garden and hopefully learn how to ignore the world.
Posted by Glen Filthie at 18:26