The other day Flapz brought back an old friend - a lightly battered Ruger No.1 I had given his son. It was bull barrelled, chambered in 25-06, and in it's day it was a friggin tack driver! Groups went .5 ~ 3/4" MOA all day long and one hole groups happened on a regular basis. The boy has no interest in hunting, I guess, and it has been sitting in the back of a closet for ages. When I gave it away the velocities had started to fall off, and accuracy had begun to degrade - a sure sign of a barrel that had had the bun. It was still plenty of accuracy for whitetail work... but as a range gun, she was done. Flapz and his sons have other guns of mine so it didn't bother them at all to return this one, bless their hearts. 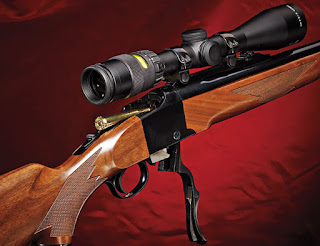 Back in it's day, the Spruce Grove Gun Club was the crossroads for gun loving riff-raff, gun club stubfarts, and all manner of scum of the earth. It was run by assholes, FOR assholes - and our gang was right at home there. I had picked up this beautiful, elegant single shot Ruger and under the tutelage of Baloney Bob - I was becoming a proficient marksman. I was starting to beat my moral and intellectual superiors in Gun Geek society - and more than a few objected to the spankings they got from this new upstart that started showing up for the turkey, gong and coffee shoots.

Today was not to be a serious competition though, we were there in the Name Of Science. Baloney Bob was wringing out his new wildcat we all called .240 Gordy. Gordy I  was basically a 7mm Mauser necked down to .243, with a blown out case and radically improved shoulder. Stuffed to the gills with the right propellant, Baloney Bob was getting close on 4000 FPS with 75 grain bullets. And no pressure signs. We did our homework and double and triple checked his velocities against several chronographs. Our best minds concluded that Gordy was going at least 400 FPS faster than he had any right to... but the proof was in the pudding. No one was surprised when the barrel prematurely washed out from the heavy loads. But by then even Grampa Smith had heard of the new wonder gun - and was intrigued. Ordinarily you have to wait a year to get one of his premium rifle barrels but Bob was bumped to the front when he sent his rifle in for a new barrel. The gun was starting to garner national attention.

Long story short: The new barrel was a dog. Velocities were 'only' about 3500 fps, and while accuracy was good, it was nothing to crow about. That's the way it goes with such things, I learned. You can have the best rifle in the world that shoots like a dream, but once that barrel burns and you need a new one - all bets are off. I spent the afternoon mostly spotting for Bob, heckling the wanks, and trying to cheer everyone up. Even though none of us had skin in Bob's game - we all kinda did. Had his experiments played out we would all have adopted the new wildcat for ourselves. We all wanted to see Bob in the famous gun rags... but 240 Gordy II was no screaming hell, and Bob would not be cheered up.

Peering through my spotting scope at Bob's lacklustre groups down range - I noticed an extra bullet hole had appeared on his target. "Which one a you wanks was shooting at Bob's target?" I barked. And of course they all denied it. Bob looked like he was going to vomit - a rifleman like him doesn't drop shots, especially off the bench. I cranked the scope up to 60x and looked again. "Holy shit! It's a bug! A horsefly the size of a chainsaw!" I shouted. "I'm gonna shoot that sumbitch right now!"

"Like hell you are, Filthie! That's my target, so it's my bug...!" Bob whined. I told him to shut up and shoot fast then, because I was gonna get it as soon as the crosshairs steadied. The other men at the benches had swung their guns round and were taking aim now too! I saw the first shot land a few inches underneath - but that stupid horsefly just kept sunning himself on the paper without a care in the world. I took up my trigger slowly, breathed, and caressed the trigger. It broke like a glass rod.

"HOLY SHIT! He got it!" one of the spotters called. I looked through my spotting scope and sure enough, there was a hole right where it should be, and some legs and juice around the bullet hole. "Take that, you arseholes!" I cried, "You've all been OWNED! By the most talented, handsome shooter ever to -"

"You shot my bug, Filthie," Bob growled. I was in mid-gloat when I noticed the murderous expression on Bob's face. Man - I've never seen Bob so pissed. "You shot MY bug." he said louder. "Clear your rifle Filthie," he commanded, "and step behind the firing line!" I did as I was told, and started to gobble in fright as Bob advanced on me. "Now Bob - don't get excited! It was just a lucky shot, and I meant nothing by it...!!!" It hadn't even occurred to me that I had kicked my friend in the nads when he was down.

I can still hear the monkeys hooting and chimping out in glee as Bob got me in a headlock and started peppering my noggin with coco-bonks, nougats and peckerheads. The left side of my brain shut down under the gruelling punishment, and I still have the lumps and dents to show for it to this day. But finally, Bob got himself under control. My clock was thoroughly cleaned and no bones about it.

"Show's over, butt heads! Get back to your guns - NOW!" Bob yelled. The monkeys hooted with merriment but happily went back to their shooting. I flumped down at my bench and tried to see something besides the stars and tweety birds that were orbiting around my head. Bob took his seat, and morosely regarded his rifle. "What am I gonna do with .240 Gordy, Glen?" he asked.

So my rifle has burnt out, just as Gordy did 20-some years ago. I am thinking that new 6.5x284 Norma will make a great gun - especially in a handsome single shot like my beloved No. 1. Am I going to make the same mistake Baloney Bob did? Far as I know Grampa Smith is retired now, so rebarrelling is going to be an even bigger crap shoot. The e-mail has gone out to Karl over at KS Arms. Hopefully I will hear back from him sometime in the new year. Karl is a bolt gun guy though, and this is a falling block single shot. Will Karl even look at it? Who knows?

As always - I will keep you posted. Thanks for stopping by, and have a great weekend and a Happy New Year.
Posted by Glen Filthie at 19:07