Guns Of The Rich And Famous 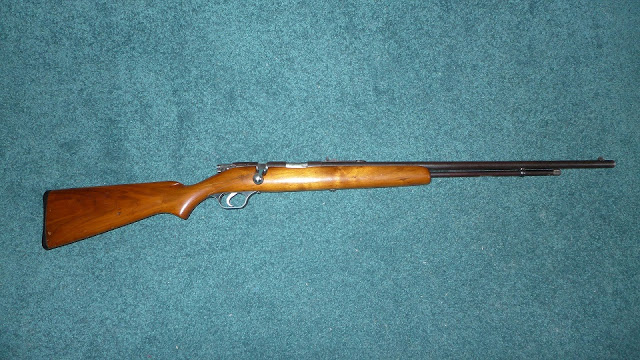 M regales us with the restoration of this fine old classic - a Stevens 66C in .22!
Looks like a nice piece of wood on there too.

Apparently he can't miss with it - and I take him at his word. I have two modern 'his n' hers' CZ 22's and I'll be damned if they look any better than the Stevens. If I recall I shelled out around $500.00 apiece for them about 4 or 5 years ago. They are darned accurate rifles too - and I'll bet that Stevens would go head to head with them and not give an inch.

The most accurate .22 I ever shot was a battered ACE single shot - almost certainly made by the Canadian Cooey factory and stamped out by the thousands back in the 40's. It was my father-in-law's gun and he took good enough care of it I suppose. The only reason I put up with all his bullshit was that I hoped to inherit that rifle when the old bastard died and went to hell, HAR HAR HAR!!!

One day his idiot son wanted to borrow it to learn his own kid everything he needs to know about guns.... except how to clean and store them. The dunce put it in some kind of cotton sock-thing, threw it in a corner downstairs and forgot about it. He did the same thing to his father's pristine old lever gun too, and a year later they were corroded wrecks. I almost wept.

I am trying to summon the will power to sell off my CZ's. They're beautiful guns but we never shoot them. Then I think about doing that... and I know damned well that I just go out buy some other one.

This little sweetheart is for sale over at Corwin for just under 400 beans.
It isn't a Martini; it's a Swiss R Fulzinger - whatever that is...
This old sweetheart has soul and character, if nothing else.

If I were to rewind my life, I'd never buy a new .22 again. There are just too many bargains and snipers to be had on the used gun racks. I have shot these old beaters and the latest and greatest target guns - and can say honestly that the old relics are just as much fun as the new guns.

When's the last time YOU shot a .22? Maybe you should grab some kids and rectify that?

Have a great Saturday.
Posted by Glen Filthie at 08:32