When I was a younger man I was always on the bow. I went to the newly-invented 3D shoots that allowed bow hunters to stay sharp for the hunting season by shooting at foam 3D sculptures of game animals. Back then I had to have the fastest, greatest, bestest bow on the market and the only thing that kept me from it was $$$$. The sport became big business in the late 90's and started attracting big crowds, big money, and big egos. Sanctioned shoots and tournaments set up and even factory reps were showing up. At the height of my archery career I grabbed a second or third place win at a shoot in Dreadful Valley or maybe Large Hole and got about $250.00 in prize money. I blew most of it on a bottle of expensive scotch. I soon found myself shooting with the local big guns in the province - and found out a goodly portion of them were flat out cheaters. One day I called one of them on it and demanded that he fill his score card out honestly. It turned into a scene, but I was adamant: I didn't cheat; I played fair and square and if this guy was going to cheat we should damned well call him on it. He refused to back down, the others all wished they were somewhere else or tried to tell me to let it go. After the shoot I lodged a formal, loud complaint and the reaction was split - half the tourney regulars and big guns grinned with amusement and applause- finally somebody was saying something about the cheating going on. The other half circled around in defense of the man because he was one of the big guns in the sport. Debate and argument raged around the campfire that night and voices were raised. This was serious shit for us outdoorsmen of the day. The next day that guy came in first and pocketed $500 and a trophy. I stood up front with a shit eating smirk on my face along with many others as he accepted that award. "Congrats, Murray - you're a hell of a shot and an inspiration to us all," and then got an elbow in the ribs from Skinbag. He grabbed me firmly by the elbow, and said, "C'mon Filthie, let's break camp; the weekend's over..." At my back, the rancor and dissention continued. "Awwwwwww… poor widdle Filthie!" and then the smooching noises. I spun around but Skinbag was firm - "C'mon. I'll help ya pack up." Another voice piped up."Fuck you, Joe! You're as big a cheat as Murray is! Maybe we should call you Mr. Mulligan...!" and derisive laughter rippled out and angry insults were exchanged. The arguments and raised voices started again and it wasn't fun anymore. But it was Sunday, and I let Skinbag send me home. After that I went to one or two more shoots but quit after that. Cheating was becoming more of a problem at the big tournaments, and a lot of honest sportsmen were pissed right off about it. What astounded me at the time was that it was the pro-shop guys doing all the cheating. Pikers and bums and weekend warriors like me played the game and won or lost on the whims of fate, fortune, Darwin and Murphy. And we did it fair and square too.

Throughout all that, I largely ignored a small group of eccentrics and loons that also attended the shoots - the traditional stick bow guys. It was mostly made up of old geezers that flapped their gums more than anything else, and shot those lame recurved and long bows with dismal results. Most made their own equipment - badly. I often wondered what was wrong with their heads. I secretly hoped I would never get old and stupid like that. But I did admire their horseplay, rude jokes, and sense of community and comradery. Those idiots were always laughing, joking and enjoying themselves.

And here I am! And I have absolutely no interest in the carbon fibre arrows built like pencil leads, the blazing fast speeds, the laser sights, the hydraulic stabilization, and all the other widgets and doo-dads that make the sport the tech-war it is today. I am seeing the warm, rich woods, the skill and craftsman ship of the makers, and the soul they imbue their equipment with. 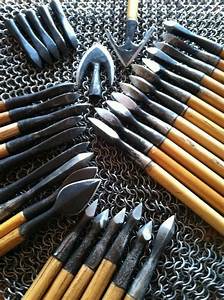 What's your fancy today, m'lords? Various chisel points do well against
noble plated armour and mail - but if you
are hoping to end a warhorse or one of the big destriers ye might
consider one of the the broader heads like those in
the middle...

In days past those arrowheads would have fetched a year's wages. Making things like that uniform and the same is the key, and took incredible skill and talent - and lots of time and materials to develop. Today we can buy them made out of better metals for pennies. I have corresponded with traditional archers that make their own. All are talented and very modest craftsmen.

Custom fletching and cresting is almost exclusively
the realm of the hobbyist or basement craftsman nowadays...


Why, I think I am getting bitten by the archery bug again...it's too bad because I have far to many other much more worthy things to waste my time on... Pity, that.
Posted by Glen Filthie at 10:24