Back in the bad ol' days the lightest camp stoves on the market were made by our good friends over at Coleman. I still have mine but it no longer holds pressure and doesn't run very well. 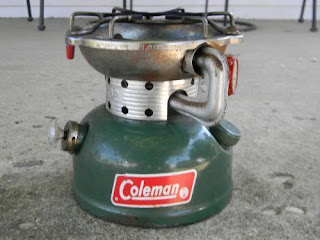 I still have it and should throw it out... but that thing has a lot of good memories tied up in it. In it's day that thing ran like a top and my wife could make anything on it. Back when we were younger and hard core we found it started running erratically in temps below -15~20C. When it finally crapped out I bowed to the inevitable and retired it and figured I'd upgrade to a newer unit that was much the same but could theoretically burn multiple fuels. I could see that being a handy feature, I suppose.

But then the guys at the ATV and rod n' gun club stumbled upon these: 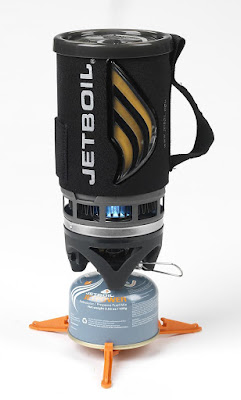 It uses proprietary iso-butyl fuel canisters but the whole shebang fits into the pot that it comes with. It will literally boil a pot full of water in a minute or two and it sounds like a bloody jet when it's running.

Awhile back I was watching this YouTubing cowboy learn us everything we need to know about making good camp coffee and he said ya gotta boil the coffee for a bit to really improve the taste so I figured I'd give it a whirl on the Jet Boil. 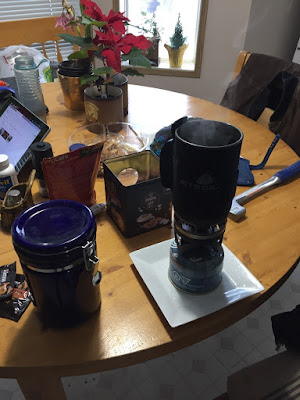 Errrr…. pardon the mess!
The wife seems to think the kitchen is a place to cook and
eat and doesn't realize that I need it
to store valuable junk and play with my toys.

The wife found me some premium coffee bags that work like tea bags. I pitched them into the pot, and brought 'er down to a rolling boil... I was kind of worried the bags might melt and make a mess but they held together and the batch of coffee went off like a charm! 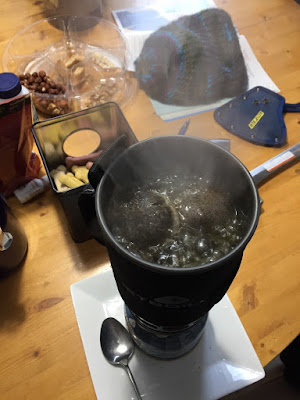 Now I am not a coffee authority or anything - but I'll be damned if that wasn't one mighty fine cup of joe! I like my coffee black and strong and I will drink it out of a trough or jerry can and enjoy it. But this batch was something mighty fine. All ya do is let it run at a rolling boil for a bit - and the ol' cowboy off YouTube is right! You DO get a better cup of coffee from boiling it!

I am seriously contemplating getting another one of these stoves and stashing it in the motorcycle with a couple of cups. Ya never know when you might get stopped by a fellow traveller or local and might have to entertain...  :)
Posted by Glen Filthie at 06:12