Well I am so damned mad, I could friggin spit!!! M and the other mean kids circled round me and my buddy here, and started making fun of me and my stove, and made all kinds of hurtful, hateful comments. Even the innernet's most fearsome survivor - Harold - piled on!!! Sob!

So me and my buddy PJ called them a bunch of Iso-Butane-O-Phobes... and flounced out in a snit! That'll learn those a-holes!!! How jealous the other pervs will be about the new sexuality we invented! HAR HAR HAR! 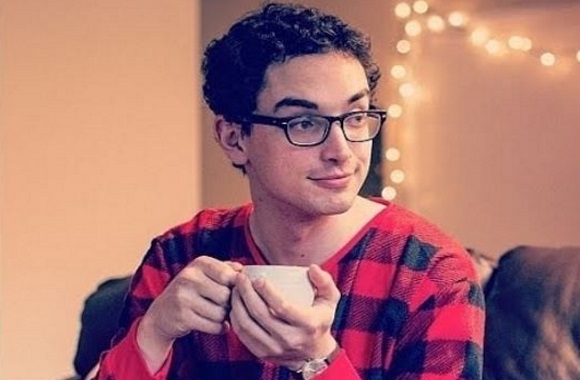 So we piled into PJ's Prius and decided to go decompress in a safe place like MEC - where toxic masculinity isn't tolerated, and the clientele are more nurturing and inclusive. 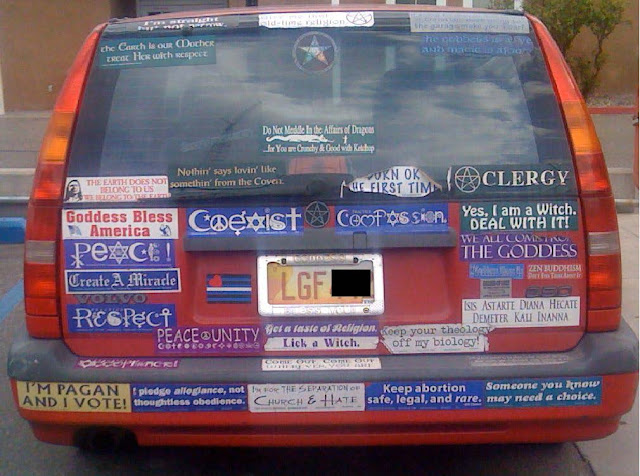 On the way down, probly headed to the same store- we wound up behind car festooned with pagan bumper stickers like this! I chit you not!!! There was an unearthly aura around the car, and an ungodly stench in the Prius - and then a gap unfolded in the space time continuum in front of the pagan - and the car was gone. PJ asked me if we should maybe smoke a fattie to calm our nerves and I seriously considered it.

Rather than push my luck with PJ and evil spirits I decided to go home and try the Fwench Press gizmo on my Jet Boil. Long story short - the Jet Boil boils water like a son of a gun! FAST! The problem is that it is built to burn like a rocket ship - and throttling it for the rolling boil ya need for coffee - is pretty damn tough. I ended up making a helluva mess with hot water and boiled over coffee grounds everyewhere. 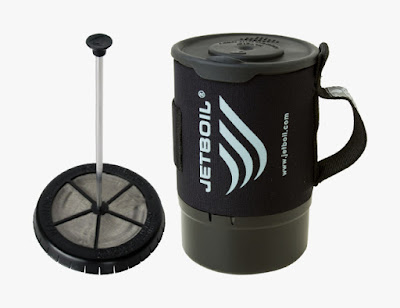 The coffee press cannot be recommended.
Don't waste your money.

I am going to have to pronounce a firm 'Thumbs Down' on the Fwench Press Coffee gadget. They're only 15 bucks so I didn't get ripped off too bad. For now, coffee - for me -means boiling the water and throwing in those coffee bags. Looks like the mean kids are right about this one after all, maybe. Oh well - nobody's perfect.

In other news, the cold snap has given me a break today so I am going to take advantage. My new heroes, Esme and Michael cut it a little close last week, heading out in -30C to do what they do.

Back in my heyday I could do -30C and lower but I had all the gear, it was all top notch, and I knew how to use it. You DO NOT want to be messing around with new gear and toys at those temperatures, and he's damned lucky Esme didn't get frostbite. In those temps you need a balaclava, mitts and the works. Camping below -25C stops being less about fun and starts being about staying warm. The vehicles and animals get cranky and unreliable too.

Have yourselves a great Sunday and hopefully you are catching a break in the crappy weather too.