I was over at Camp Borepatch where we all gathered to celebrate his big win at The Blog Oscars. Shame on me, for dropping names of celebrities to keep up with appearances! But - I'm proud to say I voted for him too! I very seldom go over there for pleasure; those guys are all business most of the time and I saw another great article on a green bean United States Marine that did very well for himself after participating in one of the most storied historical engagements of the second world war. I am the number one fan boy of the Marines. I'da been one myself if I weren't such a big chicken. But I digress! The co-star in that story is one of these: 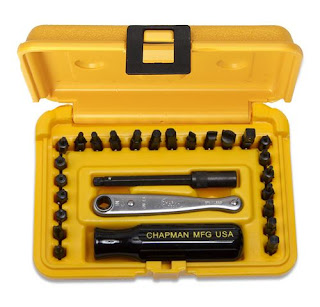 That's the hell of kits like these: ya only really need a couple -
and those are the ones you invariably need when
they decide to go AWOL.
Apparently this kit comes highly recommended. I wish
I'd known about it a year ago...

Dammit, I wish I'd known about it earlier because I would have bought one. Instead, I bought one of these: 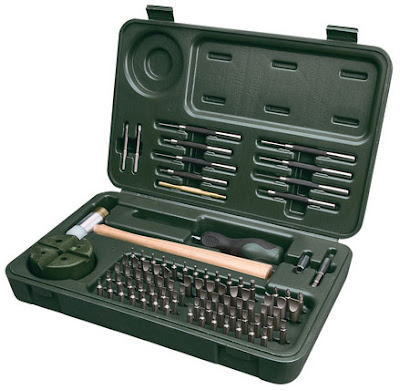 I had no problems at all with it until I loaned it to one of the guys who was putting a scope on his new 338 Lapua and he broke one of the bits in the kit. I strongly suspect they are made from Chinesium and if that is the case, most of them will break with one dirty look. Buying from the chinks is risky biscuits - in some products their quality is on par with anything the Americans can put out. On others the QA is going straight up... but they have a long way to go. In others, the old adage goes: ya get what ya pay for.

I wasn't broken up or worried about it but the fella that broke the bit was. He went down to Ukranian Tire and bought a screwdriver with the proper bit to replace the one he broke. I just laughed when he gave everything back to me and told him he didn't have to go to all the trouble.

Yannow I just cringed when our twink of a prime minister started flipping off Trump and bragging about how Canada was going to snuggle up to China as a replacement trade partner. Professionally I have worked with the chinks and I speak of them that way because that is what they are, as business people. The are back stabbers, liars and cheats and thieves that make America's crony capitalists look like pikers. Right now, they have our pretty-boy PM bent over a rail and they are giving him the business. Last I heard of it the gooks were arresting Canadian citizen in China to pressure Canada into releasing that monkey in the center of the Huawei scandal. Trump is absolutely correct to tariff the chit out of those monkeys - their idea of business is not compatible with ours.

In any event, I cannot recommend this set of tools. You'd be better off buying the bits and pieces you DO need, and spending the money to get good ones. Cheap tools are more hassle than they're worth.
Posted by Glen Filthie at 06:21