When Bubba Hits One Out Of The Park 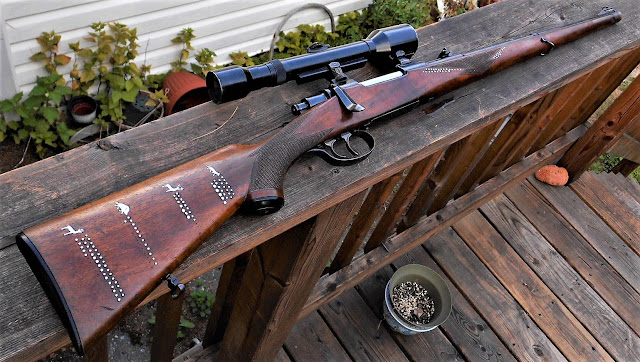 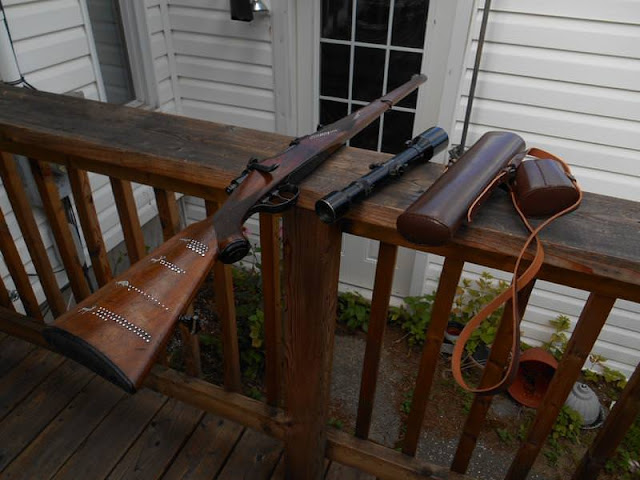 I love guns like this. There's a million miles on it, but it has been taken
care of, and tastefully embellished.

A hundred years ago in the dream times, back when I had gumption and a family - I had an old Winchester 94 in .32 Special and had nothing to do with it. I had inherited it from the outlaw side of the family. My nephew at the time was a young and promising boy from that side of the family so I figured the best thing to do would be to clean up the rifle and give it to him. It was a neglected piece and a hell of a mess. It was a great winter project: I'd do that stock up by taking the old finish off the wood (what was left of it) - and smooth it out 600 grit. Successive coats of boiled linseed after that. I considered some jewelled pins but decided against it - the gun had beautiful grain that just leaped out layer after hand rubbed layer of linseed. I figured the rifle would need a companion so I tried to make a fancy belt axe to go with it. 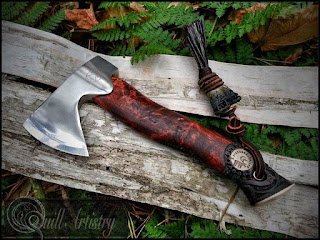 I had visions of something like this,
but sadly my skills were nowhere up to those of the artisan
that made this beauty.

The first axe I made was sub par and I gave it to the boy telling him that if it broke or got lost he was not to get bent out of shape over it - I would make him another worth hanging on to. The kid was thrilled.

His mother was not. She was a card carrying femcnut feminist, a liberal, and hated guns on general principles - and that went double for all their icky accessories too. She relented on the hatchet, but told me there was no way she'd allow her son to have a gun. I think I was on the 25th coat on the stock of the rifle at that point. The rest of the in laws jumped down my throat as well. What in hell was I thinking - a rifle? For a boy...?!?? What in hell was the matter with Filthie…? In the last civilized meeting I had with my father in law, that glowing wood on the 94 seemed to cut through the all the liberal poz. "That is a fine piece of wood, Glen..." he said.  "... and it would make a fine gift for a nephew... or a grandson... What a shame." I cold blued some of the spots where I'd removed the extereior rust and put it back together and forgot about it..

Then my family went nuts to live under the liberal rainbow, they took my unwilling nephew with them and gawd only knows what the boy is like today. His parents divorced a year or two later after I was banished from the hive for my unhealthy hobbies in incorrect opinions and beliefs. I gave the gun to King Peter to use as a camp gun in bear country and never saw it again. For some reason I didn't want to see it again.

It's a deprivation symbolic of others... and I can live without them all just fine. I hope that rifle in the pic finds a young owner that will continue to use it. May you see your touchstones and heirlooms land in the right hands too.

Welp, I gotta chit shower and shave for church today - you all have a great Sunday!
Posted by Glen Filthie at 08:05