A Gift From The Past

I was probably one of the last of the Heritage Canadians. Our country was built by Scots/Irish/Americans and it was run by them too. Back in the good ol' days you could still be a boy and act like one. Uncle Bob had a theory that for boys to grow up, there had to be some sort of ceremonial rights of passage. Such things are hard wired into the human animal at the genetic level and that's why every society had them. It was his conviction that the rise of progressive liberalism and their attack on those ceremonies and rights of passage - have had a devastating effect on our young men. He has plenty of ammo for his argument and I dunno if he is wrong or right about that.

For my brother, the transition came a little later. He and Pop tore down a 68 Firbird and rebuilt it. Pop wanted it to be fast, but not stupidly fast. I even got to help and learned a thing or two. I was insanely jealous of Big Bro when he chugged away from the farm in that fire breathing monster to his first job. He was the Golden Boy in the family and back then it drove me nuts. In hindsight that jealousy was utterly ridiculous and silly - but I say that as an old fart. Back then my blood ran much hotter than it does today. And to be fair - Big Bro could do no wrong. He had a fast car, pretty girlfriend, and he worked hard at everything he did. But I was wired different - I thought his girlfriend was a stuck up bitch, and where he was driven and serious and worked long hard hours, I was laid back in intensely cynical of everything around me. I had a stick up my ass too, I suppose. Big Bro was out carousing, working and having adventures - and I was stuck at home, lost somewhere between being a boy and a young man myself.

Somehow, Pop seemed to get that. I had thought that Pop was this ornery old dumbass that didn't get anything - when one day, he ordered me to drop what I was doing - we were going into town. I wondered what was up - we passed the usual agricultural stores, lumber yards and stockyards and went right downtown. Pop wouldn't say a thing about where we were headed. "Dumbass," I thought.
"Whatever!"

Then we pulled into WW Arcade and went downstairs. "An outdoorsman like you is gonna need a good axe, Glen - and we've got a couple in the garage. You can swing any one of them like a pro, but we don't have any hatchets. Sure, you can make do with an axe - but a hatchet is simply better for small jobs around a camp. I'm going to see if we can find one for you today!" I dumpster-dived with joy into the nearest bargain bin and came up with some cheapo 6 dollar hatchet like I saw at Grandma's house. Pop shook his head. "Let's look around a bit Glen..." Pop dragged me away from the bargain bins and my heart broke. We went into the tool section and my heart sank even further. By the time this finished I'd probably get a hammer or a rake - Pop had done stuff like that before. Welp - that was fun while it lasted, I thought.

I sauntered over, resigned - and dad presented me with one of these:

Estwing.
Made right here, close to home by
Americans.

Holy chit! That thing was $30.00!!! Pop could buy two or three hammers for that back in 1978. To me it was a thing of beauty the first serious piece of outdoor gear that I got. A knife followed, and a 12 bore shotgun after that - and a beautiful bolt action 22 after that! But the hatchet was always the most magical piece of gear I had. I think you can get these for about $50.00 now and they are still a great piece of kit. 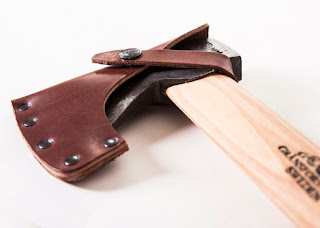 One day, when I wasn't around, Pop loaned my hatchet to the farmers down the road and they promptly lost it in a snow bank somewhere. Oh well, they chuckled - it will turn up in the spring...  I started to lose my mind and Pop grabbed me by the scruff of the neck and hauled me out where I could safely detonate without killing women and civilians. I was pissed at the world over that for sometime... close to 42 years now, to be exact! HAR HAR HAR! HAR HAR HAR!!!

Earlier this week the store my wife works at was blowing them out, and she brought one home for me. They don't come with leather sheaths anymore but that's alright - I will make one for it. I guess I am officially a big boy again! Fags like Jack, Pete, BW and Quartermain and all the usual suspects are strongly advised to take note! HAR HAR HAR!!! When my wife gave it to me I almost choked up a bit. It's funny how old memories can rise up out of nowhere and give you a boot upside the arse.

My old hatchet never turned up in the spring... but it might one day, ya never know. I intend to be ready for it if it does. In this videeyah, Ol' Shovel learns us everything we need to know about reviving neglected companions.


Have a great Sunday - and thanks for dropping by!
Posted by Glen Filthie at 09:40