The guy behind the archery counter laughed at me. "Oh man... that sure takes me back..."

He was laughing at my tackle. I had an old PSE Solo Cam (which were supposed to be the best thing since sliced bread when they came out 20 years ago) - and a quiver full of old top of the line X7 Eclipse 2512's. They were super light and fast in their time, but ya paid for that in blood! You could bend them with a dirty look! I'd relegated them to my 'fire and forget' hunting arrows. If ya hit your animal they were bent and part of the trophy for the hunt. If ya missed they were bent and ya threw them away! 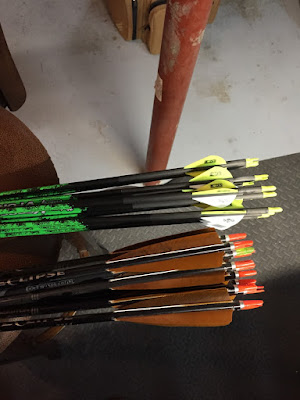 The ones with the brown 5" fletch are the old aluminums.
The pencil leads above are the new breed of carbon fibere arrows.
$168.00/dozen.


The clerk was an old fart and smirked, "the bow's a relic, just like its owner..." and we both HAR HAR HARed about that. "We'll set ya up with some good carbon fibre arrows, Mr. Filthie! You'll love 'em: if they ain't broke, they're still good!" Unlike aluminum arrows that can get bends so small you can't even see them until ya roll 'em across the table. Some people claim they can straighten aluminums but I never saw anyone do it to my satisfaction. I started snivelling about how sticky the damned carbons are but the clerk would have none of it. "What century are you in Mr. Filthie? Pulling carbons is easy now - they've perfected the manufacture of them now so that very, very little sticks to them...!"

Back in my day, if you fired the old Beman carbon arrows into the target, pulling them out was like pulling them out of a tree! They were so sticky that nothing short of adrenaline and road rage would get them out - and usually some of the target came with them. We had these gripper gimmicks and coated them with talcum, the problem was so bad. Sure hope he's right and not BSing me... I will find out later today. They don't use the big long (and handsome) feather fletch anymore either. It's all those little stubby fletches. Apparently they will stabilize the super thin carbons even with a warhead on. 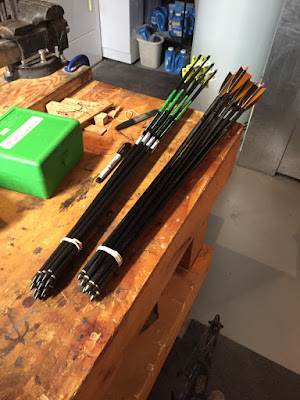 I shot indoors yesterday and I didn't even have to re-tune the bow, which I found odd. They hit to the same point of impact that the old aluminums did too. We'll see what the story is at 30 yards and out soon.

When I was younger I'd fire 100 ~ 150 arrows a day off a 75 lb. hunting bow and think nothing of it. I'd hit with that sumbitch too and no bones about it. One day I pished off all the formal field archers at a turkey shoot. I found that if I took my 60m site pin, and aimed at the wind flag on top of the target at 90m - I could belly flop an arrow into the 9 and 10 ring fairly consistently. Yesterday I was done after 60. My arm and shoulder just gave out. I can work on that. My first shots were all 9s and 10s but then I just went to pot after that.

I was going to relax but this young fella and his gal came in to shoot and she was just as pretty as a picture. She was wearing those new skin tight jeans with the rips and even at my advanced age I did a double take - and her boy friend caught it and gave me the stink eye. He had arms as big around as my legs so I wisely beat it. There is nothing creepier in the world than and old man and that is why I get on well with dregs like Jack and Harry and that lot. HAR HAR HAR!!! HAR HAR HAR!!! Cheap shot! HAR HAR HAR!

Today I am going to sneak out into the country with my bow and pointy sticks and set up my foam cube target and shoot someplace safe where I can't make an ass of myself. I am going to hunt again this year, and I need to start prepping now. You all have a great Sunday and try to find the time to do something fun.