At Dalrock’s, Of All The Bloody Places

For those of you unaware, Dalrock is an MRA, or a Men’s Rights Activist. He speaks for men who, for one reason or another, have married the wrong woman, for the wrong reasons with the wrong expectations. Some are just unlucky schlubs who, through no fault of their own, wound up on the wrong end of a very chitty stick. Many are so hurt that they can’t even abide the company of women. I myself note that some women, notably feminists, are fond of saying men are pigs and then will proceed to act like utter sows. I can understand and sympathize with the hurt of such men, having had experience with low women myself. I think there was a saying in the bible that a man is better off living on a corner of the roof of the house, and living in it with a contentious woman. Like everything else in that book, its true and I am now very careful to limit my exposure and dealings with such women myself. As I age I find gender warfare ever more tiresome so I don't spend much time at Dalrock's place.

But I digress, Dalrock revives the classic, endless caliber debate: 9mm vs 45ACP. I guess the FBI is going back to 9mm. He also throws in the all too common and poisonous gender politics that infest all the intellectual spaces these days. What errant foolishness. I dunno why this debate continues; it  was laid to rest in the 80’s. I forget the man’s name, but he published a statistical study on the effectiveness of the various calibers in being able to produce one shot stops in armed confrontations. He used homicide stats from the nation’s morgues and police data bases. He found that the 45 ACP edged out the 9mm by a couple points. Then he ended this scientific study with the classical scientific accuracy statement: “These results can be considered accurate, 15 times out of 20, +\-3%. That should have been the end of it but then the sausage grinding started in earnest as both sides tried to muddy the waters with variables like marksmanship, bullet construction, tactical settings etcetera ad nauseum. To be fair those variables have a huge impact on results, but they were effectively factored out of the study by predicating it on one shot stops. If you put down your assailant with one shot, you are almost assured that the marksmanship was right on the money, and that bullet construction was adequate.

It’s only an argument now for fanboys and stupid people. In the real world, you are shooting ballistic twins, and of far more import are the tactics and marksmanship skills. Dalrock's gender politics go out the window wholesale - yes, women and inexperienced shooters will tend to shoot the 9mm better of the bat than the .45 because of reduced muzzle blast and recoil; most men will shoot the 9 better too. In the real world, there is only one reason to take the .45 over the 9 - and that is the lower velocity of 45 lends it to better shooting with cast lead bullets. Even that is a limited advantage; if your gun uses polygonal rifling as my Heckler & Cack does - cast lead bullets will instantly void your warranties and you run the risk of blowing up your gun. Cast lead is not recommended for such guns. 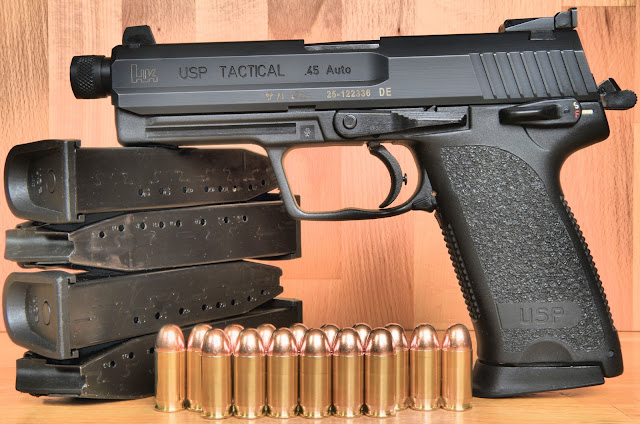 That is my personal choice in fighting guns. I only learned after I bought it that
it had polygonal rifling.
No cast lead for you, Filthie!
Doh!!!

There's a lot of snobbery in this sport, and without naming names I know of an exceptionally contentious woman with a sharp tongue and an excruciatingly dull wit that would say something rude bout HK, the gun's ancestry that involves the famed SOCOM Mark 23, and fat old men posing with the guns of real warfighters. Suffice it to say she's an idiot, and that she is rapidly becoming a fat old slag who tends toward guns favoured by black pimps and thugs, HAR HAR HAR! My HK is at home on the target range punching paper, and offers superior accuracy to go along with the hefty price tag. The SOCOM guys were entirely correct to select a gun like this over something like a Glock. For serious target work, the stock Glock is no match for the stock HK. I stand ready to prove it too. 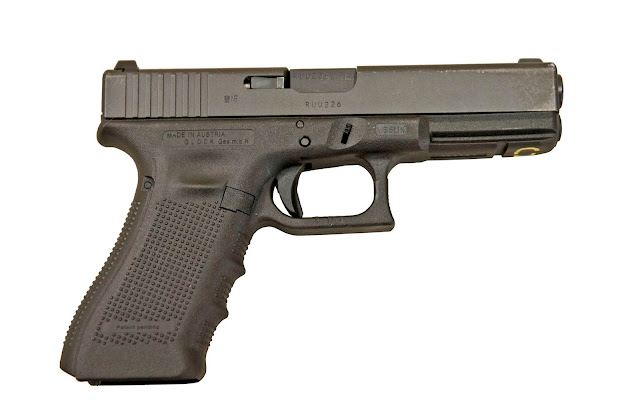 Having said that, if all you're doing is fighting with a gun, this POS is as good as it gets. For wet work, it's about getting your shots in the centre of mass on the other guy before he does it to you. This gun will ruin your day if you ever find yourself unprepared and on the wrong end of it. You won't feel bad about the bumps and scrapes that carry guns inevitably get with a beater like this too.

Even from a target perspective - if you want to shoot jacketed bullets, there are some very accurate 9mm's coming out. And - it's getting so it doesn't really make sense to reload practice ammo for the 9 - there is all kinds of very cheap practice ammo out there for 9's that make almost make reloading unnecessary.

I readily admit to snobbery myself. Fact is I shoot the 45 because I have spent most of my adult life learning to abide the recoil and muzzle blast of bigger calibres. But I am honest about my snootery - the fact is the 9mms offer the shooter pretty much everything the 45 does. Women can and do shoot the 45 ACP well too.

Just buy a gun and go shoot. If you're inclined, buy a reloader too and make your own shells. Owning a gun may be a right as is self defence - but it comes with responsibility too. Drink and shoot responsibly - and have a good Monday.