Yesterday we got a rare day of sunshine and just decided to head out for a little motoring. It was my first day between jobs and I may have a bit of a holiday before resuming the job search. The wife even had the day off so we saddled Big Red up and did a half day trip. Out east is a little town called Lavoy. It was mostly a ghost town off the main highway, but the yuppies are trickling in and buying the old buildings and slowly refurbing them. I expect in the next decade all influences of Old Alberta will be gone, to be replaced by homosexual artisan exiles, potters, urban bee keepers and the like. 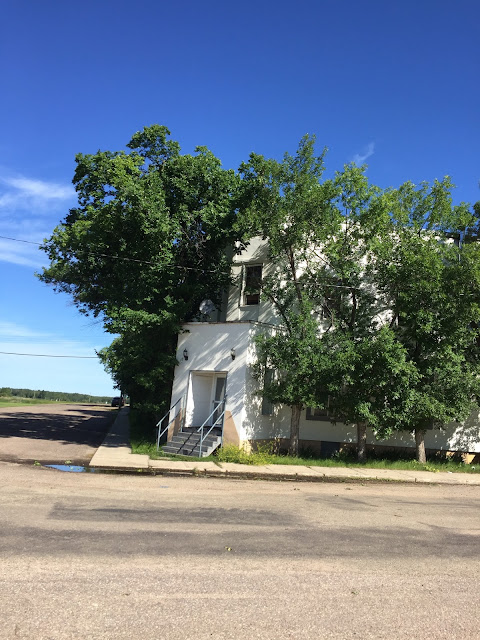 Last week at work one of my contractors said that he will
be installing solare on this old hotel.
The trees that embrace the building will have to go if that is the case.
I could make a rude joke about sacrificing CO2 scrubbers for
solar power... but environmentalism is not the goal of most environmentalists.


On the other side of the street from this hotel was an old antiques store. For about the last ten years they have been running a "Going Out Of Business Sale" and I figgered I better drop in to snag any last minute bargoons that may be available... but they had finally gone out of business and the old business was up for sale.

We took highway 36 north up to Two Hills and had a delicious veggie picnic and coffee. (The wife is on a diet too and she's having the same fun that I am having with it, HAR HAR HAR!) Ordinarily we'd have dropped into a local eatery for lunch. Maybe one day, if we can get this damned weight off. 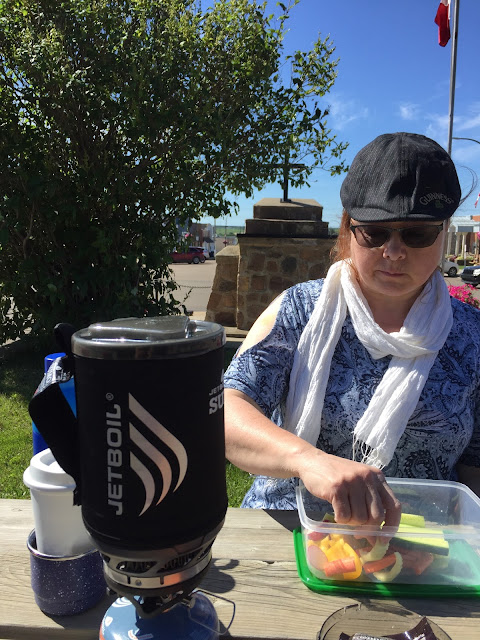 Jet Boil is the official camp stove of the blogs "Nails And Sawdust"
and Mad Jack's Shack.
It boils water for coffee like a champ - that's for sure.

I didn't recognize the town until we were on the way out and on the way home. We passed another old hotel that me, Rotten Rob and Baloney Bob crashed at 100 years ago. We were finished with a successful hunting trip and way to drunk to drive - and we pulled in piled up there. I still remember the hangover. Gawd, we were stupid.

The bike is running like a champ, I have  4th degree sunburn on my face today...  But life is good.

Have a great Saturday.