Well today was my last day at the solar power company. I wasn't even officially unemployed yet - when the cell phone went off with a rude text from BW telling me to get off my arse and get a job! The bloody nerve!!! I'm still mad about it!!! I should go on welfare just to teach him a lesson!

Working in the solar power industry has been a wonderful experience in so many ways. It's the damnedest thing: as you would expect from a solar power company - everyone here was a full fledged greentard member of the Gaia Cult. And lord, were we ever vibrant and diverse! We were a carefully balanced staff of wahmen, chinamen, negroes, pakies, and other garden variety simians. Diversity was only for us lower echelon peons of course - the three managers were all lily white white males - but they went to great lengths to signal their virtue. We even had a flaming dyke and an ethnic faggot too. The women were in their late 20's and mid 30's and ran the middle management. They were heavily tattooed and had more metal on their faces than I have in my tackle box. (I think they had some of the same lures I do too, come to think of it! HAR HAR HAR!!!!). I got to spend the year rubbing shoulders with The New Progressives, right in their own back yards. Oh, if they only knew! What would they have done if they'd found out I was one of those icky Christians like Gorges Grouse? Or a filthy climate heretic like Borepatch? Or a racist bigot like Wirecutter? Or a homophobic cretin like... like me, I suppose! HAR HAR HAR!!!

This morning I looked over my wardrobe for the right shirt to wear on my last day. I had one that said "Incitatus For Senate" that was awesome - the Stasi didn't know whether that one was seditionist or not. I had an oilfield shirt with a company logo and a derrick on it that was inappropriately captioned, "Your Hole Is Our Goal". I had one from my former employere: "Tools For Studs With Big Nuts" that would have triggered all the women and probably the faggot as well. In the end I chose to maintain my cover and wore a respectable golf shirt. 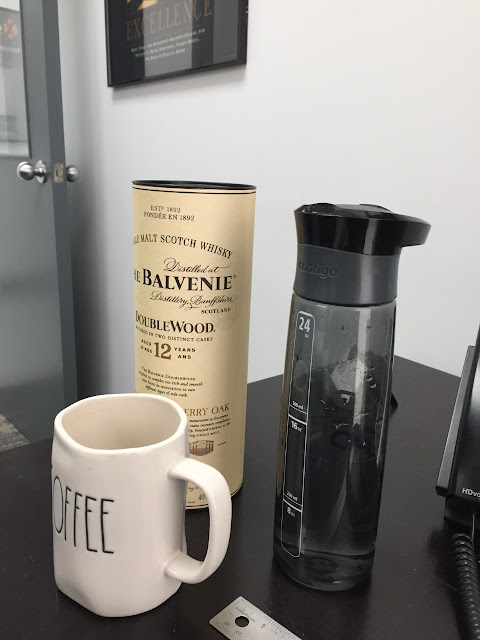 If they knew who I was, I strongly suspect the bottle would
be spiked with urine or rat poison.
I won't take any chances though - I will be sure to pour a glass for
somebody expendable like BW or Jack to make sure it is safe first.
I suppose I shouldn't be such a dink - the bottle
was a gesture of respect that they didn't have to make.
Fella like me probably is more deserving of the Bum's Rush
out the door.


So - what did I learn after a year with my political enemies, functioning as I did in their own courts, right under their noses? Quite a bit, actually.

One day the dyke came to work with her daughter because of baby sitter issues or something. I even saw her love partner that day and I could see the train wreck coming for this little 'family' a mile away. The girl was dirty, slovenly and fat, just like her 'mom'. I said nothing and zipped my lip. Our paki was an outside salesman that never made sales calls and spent his days watching OyTube and letting me do his work for him. The management thinks the sun shines out his bunghole and I was content to leave them with that impression. Both of the girls are domineering hags that are 'hitting the wall hard" in their mid-30's. They're getting fat, but you can tell by their demeanour that they probably had looks once, and that they probably wrapped the men in their lives round their little fingers. Both will be divorced in a couple a years - and I will cover any bet you'd like to make on that. My manager was a young fella in his mid-30's just coming off a divorce of his own. I could have explained a few 'red pill' concepts to him - but it wasn't my place. I was here to observe because these are the leaders and movers and shakers of tomorrow - and I am just a stupid old stubfart that is an artifact from another time. One thing was common to all these people: they were basically all good sorts - but they have no rudder. They're trying their best to be good people, but poz and political correctness and chithouse agendas prevent them from doing so. Some of them are hurting bad now - for others the worst is yet to come. Just as the Yank democrat party is tearing itself apart with such nonsense down south ... this company will eventually do the same. It's inevitable and I think that is why the owners sold it. The other thing I noticed is that these folk are not really capable of any reasoned critical thought. They can't see the consequences of their actions at all. When bad things happen to them it's never their fault; bad things happen because of Nazis, bigots and haters - and guys like me. When they crash and burn they are going to take people with them. There is no saving them, or talking to them or reasoning with them. All you can do is STFU and try and not get any on ya when Darwin and Murphy decide that they've had enough of their chit.

I used to hate these people but now I see them differently, somehow. Uncle Bob said that some people waste their lives searching for meaning in their existence and will never find it without a functioning  knowledge of virtue and vice. As usual he was absolutely right about that. I'd seen enough - and it was time for me to leave. I didn't belong there. I wish them all the best of course, and hope like hell I am wrong about what the future holds for them. It's time for me to admit my obsolescence, and get the hell out of the way for whatever the future brings. I have faith that ultimately - good things will come of all this.

I am going to take a couple weeks off before resuming the job hunt. Maybe jump on Big Red and see where the road goes. For now - it is time for a well earned break.
Posted by Glen Filthie at 18:22