Good work, men! Why - Red Green himself would approve!!!! 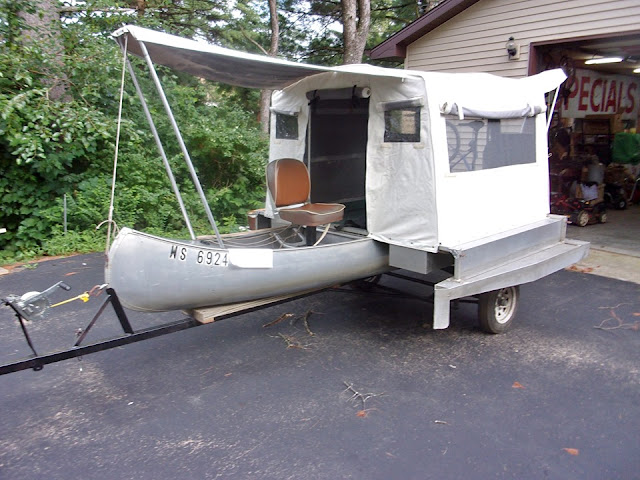 Here at Uncle Bob's some a the retards are actually savants.
The ones that built this one are called 'Shipwrights'.
No doubt about it - the Adaptive Curmudgeon will be GREEN
with envy! 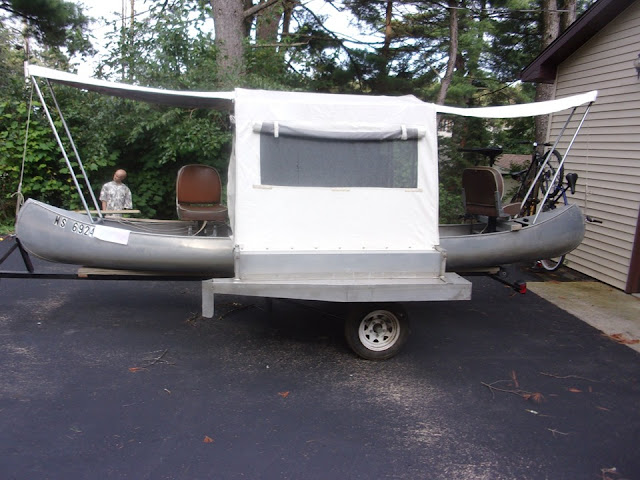 A hundred years ago I bought a pontoon boat with the best of intentions. I was gonna go out fishin' at just this time of year. The screaming families with boozed up parents and juvie kids are clearing out of the campsites to go back to school. The nights get a little cooler - and the fish really start to bite if you are on your game.

On the last year I had the boat, I figured it would be a great idea for us men to get out to the trout hole for a last 'end of season' trip. I invited Flapz, my father in law, and one of his buddies. Flapz had a canoe and I figured we would use that and give the old boys the pontoon boat. Preparations were made: I raided my well-provisioned scotch collection and filled flasks and carefully stowed bottles. The FIL filled up the Coleman stoves and lanterns and made sure they all worked. We got out the cold weather fart sacks because there was frost at night now, and the leaves were exploding into colour. Flapz ordered some custom cut 2" bronto steaks and provisioned us with the nibblies and snacks.

When we arrived it was magnificent. The lake was like a sheet of glass, the leaves on the trees were a riot of fall colours, and there were only a couple other campers besides us. The tents went up, Flapz and I took the boats out - and the old boys collapsed into campchairs with a drink back on shore. They had no interest in fishing - they were there to chat and drink and take in the sunshine.

My FIL's buddy, Bob... was a drinker in his day and popped beers at a rate that made my eyes spin. I knew before long that the next day wouldn't go well for him. My FIL seemed ill at ease and vaguely unhappy. I had planned to take him aside later in the day to quiz him but he didn't want to talk. I had news for him too - I had to break the news that his granddaughter was a militant queer SJW and that if he ever had great grandchildren... he'd probably wish he hadn't. I figured I'd catch him alone some time to break the news to him.

When we got back off the water the old boys took charge. We took to the campchairs and they got up and started cooking. They drank as they cooked, and told lies about hunting and fishing trips they had taken in their youth. Afterwards we were again pointed back to our chairs - they did the dishes and kept bullshitting about the glories of their past while Flapz and I smirked at the antics and stories.

The embers were burning down and we were all thinking about the beds except Bob - who was still chugging beers at an inhuman rate. He wasn't a loud obnoxious drunk - but very quiet and reserved. He then spoke sadly of his son who was a great disappointment to him. Apparently the boy had done much the same thing my kid did - got through high school, ignored his parents and promptly enrolled in a costly, mickey mouse non-program at some two-bit college. The boy ended up with a fake degree in nothing and was pressuring Pop to help him pay his loans back. Of course my own toungue had been loosened by the scotch. I was about to talk about my own kid when my FIL jumped in. "C'mon, Bob. I think you've had enough and tomorrow is going to be a really tough day...".

"Leave 'em alone Doug," I said, "he's a big boy and I'd like to hear what he thinks about some things your Granddaughter is doing...". In a panic, my FIL was under Bob's arm and hoisting him out of the camp chair. He gave me one long, angry, sad and significant look that just said without any words spoken, "Don't." It was then that I realized that he already knew about his little princess of a granddaughter. And I knew that he and I were going to have words about it, that it wasn't going to be good, and tonight was not the night for it.

"G'nite boys," I said, "Try not to chit the bed, Bob!" One of them, I couldn't tell which - farted menacingly in reply and we laughed like Vikings at the sport of it.

The next day was predictable - we packed up the old boys and carefully loaded Bob into my FIL's truck. I have no idea how Bob made it through the night without erupting like Mount St. Helens - but he did, I'll give him that. Today, however, he was sick as a dog and wanted to go home. So did my father in law. They pulled out and on to the main road, leaving Flapz and I to ourselves. "Guess they're a little too old for this kind of stuff, Glen." Flapz said. He was right about that. Somehow, without me noticing, the boys had gotten old... like 'geriatric' old. They no longer belonged out here with the tents, sleeping on the hard ground, drinking the sun over the horizon and back up again.. Soon - so it would go for me too I thought.

"Think we can still get a few for the fry pan tonight, Flapz?" I asked. In minutes we were back on the water in our boats, with our flasks. The sun shone down on it's new dime store camper kings, and the fall colours reflected off the clear lake. If there had to be a last civil dicussion in my family... we couldn't have picked a better setting for it.

After that it was the drama, shrill accusations, ultimatums, tantrums and angry retorts that you would expect from a millennial sexual degenerate and their enablers. I sold the boat, because I never really had much use for it after that. Everyone was too busy or couldn't get the time off work. The other thing was that the campgrounds began to fill up. People are camping longer now and the former 'off seasons'  or slow times - are no longer what they were. More and more people want to be out and away and it gets harder and harder to do that.

To our new Kings Of The Great Outdoors - I hope you limit out, and start good things in your courts rather than end them.

Have a great Monday.