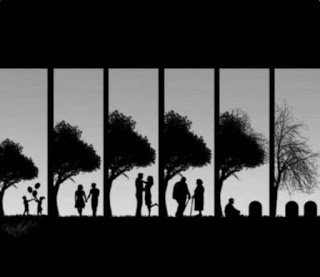 It’s funny, the connections your mind makes when you’re half way between this world and that of your dreams when you wake in the morning. I saw this one up at Gorges' place... and it just seems to put everything in perspective. My wife and I are somewhere between that 3rd and 5th frame from the left. The only difference is I will almost certainly  go first.

We’ve done alright. We met as teens, lived our lives as well as we could, and so far, by the grace of God... we’ve survived all our own mistakes and those made by others in our family. I have my regrets but these days... who doesn’t?

As I cruise through the blogs and nooze this morning, I see people foaming at the mouth over the antics of some 16 year old Swedish child activist that’s out to save the enviroMINT. Her parents are greasy, elderly hippies and as you’d expect, and they’re idiots too. Pelosi is finally going to impeach The Bad Orange Man - they got him THIS time, by Godfrey!!! Everywhere, stupid people clamour for attention with stupid props and stupid issues.

Up there in the pic... I have maybe two and a half frames left. The other three and some were spent amidst the noise and mayhem, consumed with confusion, trying to appease and live beside such stupid people but thankfully ... they’ve since fallen away. I still have - God willing, knock on wood and all that - around two and a half frames of my life cycle to focus on what I have left, and what is important. So - what would that be, exactly?

Life is just a breath or a puff of a breeze... and then it's gone.