Fear Not The Gun

Well it looks like I've started another retard blog war. Not much to see there other than the usual retard slap fight that I've had before on the subject of hobby drones with Aesop, Pete, and the usual old farts that run around in Velcro shoes, squishy adult diapers, gobbling and clucking in fright about things they don't know about.

When the fight first started the hens were saying that terrorists would kill millions using drones to do the dirty work. They envisioned them being used to bust tanks, wipe out Marines by the platoon, transport drugs across the border - you name it. To support them - a couple of brainwipes actually tried to do it. One was a disgruntled retard whom the cops picked up with little trouble and the attempt failed. In another, some rag head in the sand box tried to frag some Marines in the sandbox and failed. But there a few cool CG animations that showed them doing just that, so I guess they figured it just HAD to be true!  Of course it all came from yellow journalists and the usual obscure and disreputable rag sheets and webzines. They write crap like this all the time in an effort to sensationalize and create controversy and click bait. It works for the older folks, I guess.

Apparently I was proven wrong by the cool kids and my moral and intellectual superiors as evidenced in this latest attack in Saudi Arabia. For us to have a debate, we need to first of all be intellectually honest (fat chance of that!), and we need to clarify and define our terms. For the purposes of my side of this argument: 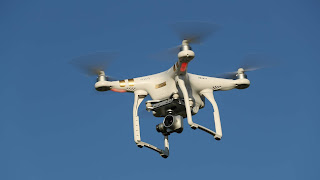 This is a hobby drone. If you remove the camera and gimbal system,
the bigger ones MIGHT lift a payload the size of a standard hand grenade.
It won't fly well, and any degree of precision will be impossible.
No, you won't bust tanks, sink warships, or frag regiments of Marines with it.
In fact, it will do well if it even reaches the target.

This is one of the suspects in the attack on the Saudi refinery.
This is a weapon of war, designed from the ground up to be a weapon.
In point of fact, it is better described as a cruise missle
rather than a drone.
The turbine propulsion puts this weapon out of reach of your
average smelly rag head terrorist. It must be built, maintained, and deployed
by trained experts.
That in turn would infer some kind of gov't support. 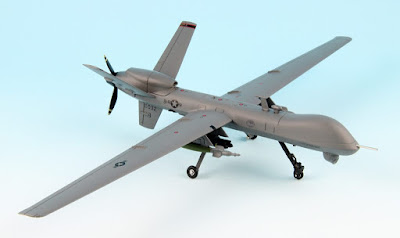 This is the General Atomics MQ9 Reaper drone. When we refer to drone
weapons, this is generally what we are referring to. We could hand over
every single last one of these to the rag heads and they would be flummoxed.
They have their hands full with the workings of a modern flush toilet - so
sophisticated weapons like these don't make sense to them at this time.
This warbird carries missiles, does recon work and comes home to refuel and re-arm.
It employs hardware, software and firmware that is at the cutting edge
of technology today.
They are the perfect weapons to use against foreign terrorists that fight like dogs
and live in caves and mud huts. For a sophisticated
adversary...? They're slow, not particularly stealthy, and carry
modest payloads.

Getting back to Pete and Aesop - no, hobby drones will not be used to kill our forces anytime soon. And no, cheap hobby electronics will not be jury-rigged into sophisticated weapons platforms like the Tomohawk cruise missile or the Reaper Drone.

Rather than trying to soothe the ruffled feathers of hysterical old war gamers, I think we really need to take a hard look at our threat assessment methodology instead. We're getting bogged down on the weapons when we really need to look at the people abusing them. These guys can and have flown airplanes through sky scrapers. They've shot up bus loads of school kids and innocent civilians to score political points. Now they are attacking undefended refineries.

Historically we have been here before. The ancient Romans had nothing but trouble with the outlying tribes as they sought to maintain their empire. Eventually they were forced to massacre a few of the tribes right down to the last man, woman and child. And it worked - for awhile. But later, as their leaders weakened the empire started to rot from the inside as ours is doing now - the tribes grew stronger and came back to sack Rome and plunge the world into the dark ages. Today the democrats are trying to flood our nations with violent savages and human trash imported from the third world, and they're going to try and grab our guns too.

I personally think we have far more pressing and urgent things to worry about. As usual, it is the people, not the technology and hardware that poses the problem.
Posted by Glen Filthie at 08:00