The other day I was taking my ease with another PBS WW2 crockumentary and nearly pooped my pants in rage! The narrator - no doubt some hare lipped retard liberal - was going on about how the poor, poor Marines were betrayed by Uncle Sam when they hit Guadalcanal - because "they were shooting obsolete bolt action rifles."

I wanted to reach into the TV screen, pull the flimp out - and b*tch slap him into the middle of next week and back again! Let me say this about that: if the Narrator and the fags historians (hork, spit) at PBS knew what they were talking about and had done their homework - they shoulda felt sorry for the bloody Japs! 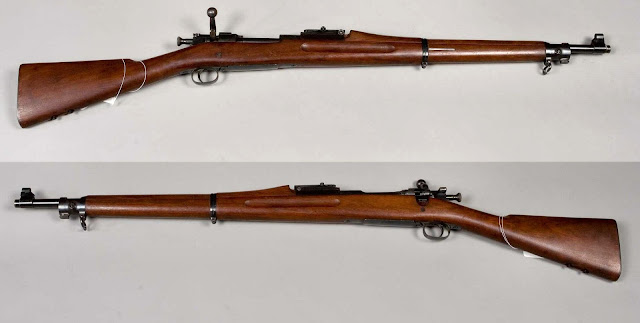 This little sweetheart is the 1903 Springfield rifle. It is almost certainly the best battlefield bolt gun
every fielded, with the possible exception of the 98 Mausers. The two are
basically clones of each other.

Back when I used to shoot a lot of milsurps - I lost count of how many times some bunghole put the boots to me and my Enfield or Mauser with one of these - and ruined my day! I've seen more than a few of these refurbed and built into serious modern target and benchrest rifles too.

According to the legend and lore I have, the Marines (who were, and still are the best riflemen in the world) - almost mutinied when the brass told them to turn in their 1903's and start using the new fangled Garand M1's. The reason for that was that they knew what they could do with the 1903, and the Garand had yet to earn it's stripes and had not been proven on the battlefield. If I were an evil world power holed up on a remote island in the pacific - and the Jar Heads were headed my way - I'd get the hell outta Dodge and no bones about it! And if they were to catch up with me and start shooting, I would rather they use the modern M16 mouse guns rather than the 1903 Springfield. If you get hit by the 30-06 your day is over and that's all there is to it! 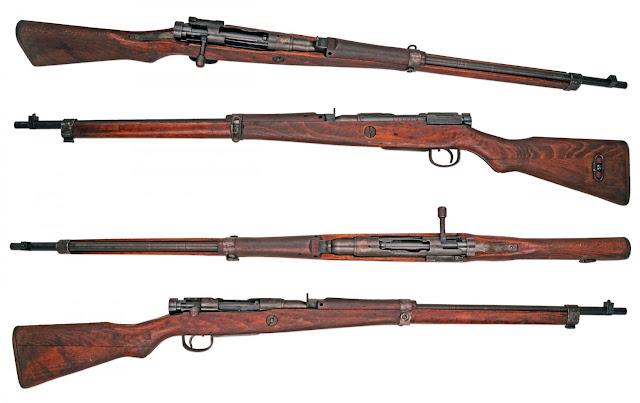 The Japs, of course, were armed with the 7.7mm Arisaka rifles.
I only ever saw one - and it had the Emporer's Chrysthanthimum proof marks on it.
It was a valuable curio and the owner refused to shoot it.
I don't know much about it but by all accounts it too was a formidable rifle and not
to be sneezed at - but not the equal of the 1903.

Fortunately for the Jar Heads, they lucked out when they traded their 1903's in for the new M1 Garand semiauto later on. Their new rifles were accurate, faster and hell for stout. The M1 could put more lead in the air faster than the older bolt gun - but for flat out accuracy most of the serious marksmen still preferred the 1903 - or so I've been told.

It used to be a fella could buy the Springfields and Garands if he kept his eyes peeled... but now? They all fetch top dollar around here and are priced out of reach of the casual shooter. They are for the dedicated gunny or collector for all intents and purposes.

I am hearing grumblings from the back channels that the US is considering the 6,8 SPC as a replacement for the 5.56. Has anyone else heard any more about that? I would love to know what the Marine armourers and instructors at Quantico would have to say about that?

Gawd, I need to hit the range now in the worst way. The AR15 calls.