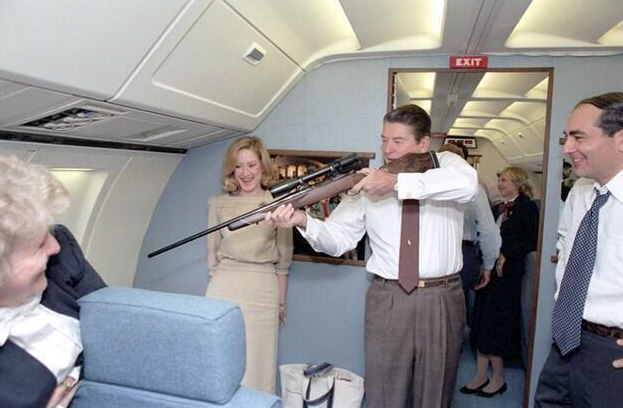 I remember wondering what was going to happen to the American gunnies when the assassination attempt was made on Reagan back in the 80's. The anti-gun crowd came swarming out of the woodwork right on cue. That cunned stunt, Diane Feinstein - got her hooks into Sarah Brady and she went off the deep end too... and the blood dancing media was filled with menopausal old women emoting on evil guns - blaming them for crimes their idiot failed social experiments were committing. "Surely now, those awful conservatives would think twice about those icky guns," they reasoned.

Welp, Nancy went into the hospital with a 20 lb. econo-jar of medicinal jelly beans for her husband, and in no time at all he was up and at 'em and on his feet again! The chitlibs pooped their pants in rage when he took the odd break and photo op to convalesce … on the rifle range! I still remember the outrage from the fags at TIME and other mass media slobs.

Didjya see what I did there? HAR HAR HAR!!!

What day is it? Nevermind!!! Have a good one and thanks for stopping by!
Posted by Glen Filthie at 05:15