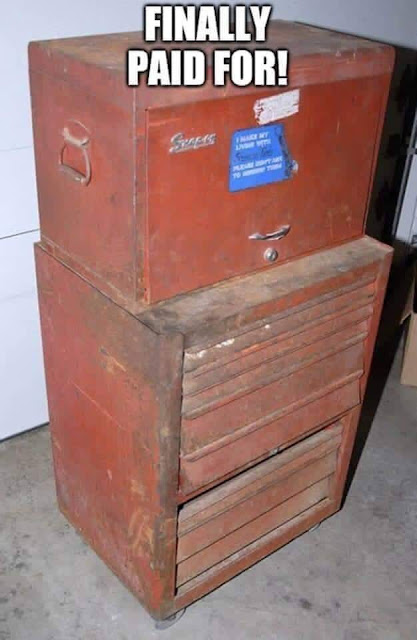 My Dad has one just like it. Although, Pop's is still
in mint condition and ready to go back to work - even
50 years after he bought it.
Pop is the kind of man that wipes down the lawn mower after using it.


That looks exactly like Pop's. He was a Snap-On guy and he worked on everything from jet engines on down. Like my wife and I, when he and Mom were just starting out, money was tight and Pop paid for his tools in blood. Mom would burst into tears in the early days if Pop lost a tool and had to replace it because money was so tight. Of course I don't remember any of it, by the time I came along Dad's apprenticeship was behind him, and he was a respected journeyman and the economy had started to boom. By the time I was in junior high school he was wearing a suit, running the municipal vehicle and equipment services and only got his hands dirty at home when he tore cars and motorcycles apart for us kids. We used Pop's tools then for ourselves and poor Dad went nuts when we mixed them up or lost them ourselves.

What grabs me about this pic - is that one of my former customers up in Fort Mac was the MAC Tools dealer for the area. Ol' R was the top salesman of MAC Tools worldwide during the second oil boom and all the projects were going crazy. One day I dropped in and he was going nuts - his sales guys were all tied up, more customers were coming in the door... and it was obvious my sales call was blown. I was going to leave when R saw me and asked if I could help the kid out back unload a truck that just pulled in. Sure, no prob! (It was one of the best things I ever did - in gratitude R later introduced me to any number of big wheels on the projects in supply chain management - and I started making big sales too).

We must have unloaded about 12 tool boxes that were close to three times bigger than the one in the pic. When I thought about it - it made sense. Back when Pop bought his tools most mechanics couldn't afford their own impact or pneumatic tools - those were very expensive back then and usually they were purchased as shop equipment. Later, R told me that there were even bigger ones available. Mechanics nowadays have all kinds of cheap, disposable power tools of their own that Pop never would have access too in his day.

Dad DID have some cool stuff though. He had a complete miniature ratchet and socket set- made by Snap On - and it must have cost a fortune in it's day. What was it? 1/8" drive? I think I remember him saying it cost over $300.00 - back in the 1960's when you could hire a good mechanic for six or seven bucks an hour. He must have used it on the jets because I never saw him used them on the machines around the farm.