I see the cool kids are all carrying nifty new pocket organizers. I can see the day when they are viewed with the same contempt that pocket protectors are - but whatever. At my age, my only interest in the cool kids is if they come up with something interesting useful. I have taken to carrying a bunch of junk again in my life as an ageing elderly vagrant stubfart and I like the concept of everyday carry and some of the trinkets that go along with it. 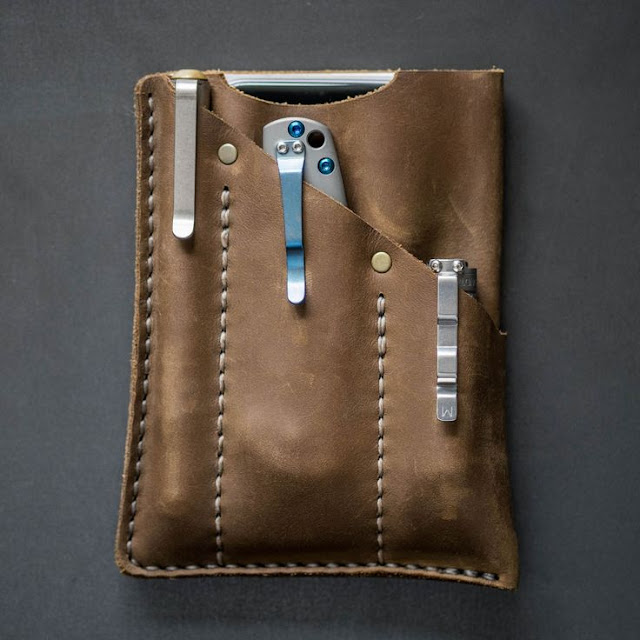 It keeps your crap from banging around and rattling in your pockets.
I am going to make one that holds a pen, a small note pad, the knife and a penlight.
I will keep ya posted but I gotta finish some other projects first.

The cool kids present their various favourite flashlights and knives and squabble about which is best and why. It's guy stuff, I suppose, and even then, a lot of guys don't give a hoot about such matters. For me it's the same as it is for dogs sniffing each other's bungs - I am very nosey and like to see what the other guy is carrying and why. I will grill him on his hunting rifles, and root through his tackle box when we're out fishin' too. It's stuff that appeals to me down in the lizard brain at the genetic level where I seem to do most of my thinking these days.

When the boys start arguing about pens though - I just toon out. Apparently there's tactical pens that double as stabbing weapons, or ones that you can write on the surface of the moon with as well as the outer planets. "And they are guaranteed not to blow up in yer pocket!!!! NASA spent 4 million dollars in R&D developing them!!!" Why - sure they did, the assholes! And the Russians sent their cosmonauts up with a bloody pencil!!! I was shocked to learn that those scum sucking red bastids actually have better rocket engines than we do. Gee, I wonder how that happened? Probly some affirmative actioned nig-nog or sexually disturbed nut case needed a pet project, I suppose.  And for the record those damned space pens DO explode in your pockets. Don't ask me how I know this.

Back in my school daze I developed a great affection for mechanical pencils. There's any number of fancy ones for those of you that wear pinky rings (and squat to pee). But when the topic is mechanical pencils... the Russian approach is best! 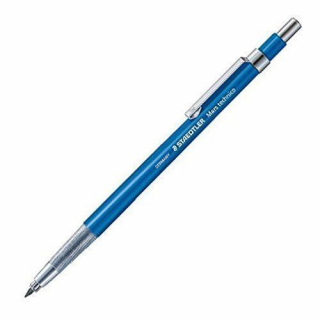 That's the Staedtler mechanical drafting pencil with 2mm leads.
Get HB soft leads for everyday use.

Fellas - if you don't have one of these yet - give them a go. They're only 8 or 10 bucks and you will lose it before it breaks or wears out! The sharpener is in the top stainless steel cap, or you can buy one of those too! 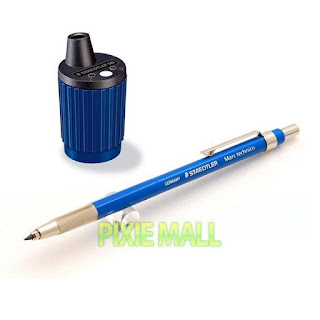 I have these in the shop downstairs and love them.

These things write in -30 to +30C, and they are built to work. Be watchful of them, seldom have I lost one but I've had numerous attempts at theft! And with good reason!

Just thought I'd pass that along. Up here we're getting the first serious snow... the shovels and blowers are out and everyone is getting it gone before it ices up. By this time next week the novelty will be gone and the lazy turds won't shovel unless they have to, HAR HAR HAR!

Hope you are warm indoors and have a great Saturday lined up.