Poor ol’ Macey. I cut her walk back again. We all do about a half mile, and Mace flops out thankfully at the end of it. She gets a treat, goes into her crate and crashes. She sleeps with a smile on her face so it’s all good.

But that leaves Mort and I in a pickle. He’s getting fat, and I worry that he won’t be able to keep up with me when I go to fight crime and senior delinquents. It’s time for some serious PT! I strapped on my old hunting ass pack and we headed out at a gruelling pace!!! 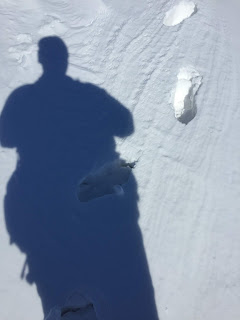 I’ve heard it said that the Inuit have 26 terms for snow. I can believe it. We’ve had high winds, and the walkway blew over yesterday. You can see by those little footprints where the walker broke through the top crust of the snow. A day later, us two big galoots trod right over it without leaving so much as a print to speak of our passing. Mort kept pace but walks behind as is his wont. He fancies himself as my guardian and feels that is the best place for him to do his job. He only goes up front if he perceives a threat or challenge. 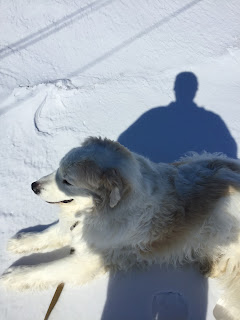 We were out for two hours. But when we got back, I was ready for a break. I think I may be a tad out of shape too! But two hours were all it took. On the way back, that snow we’d scooted over on the way out had softened in the spring sun, and I started breaking through some of the drifts were knee deep and it was a drear to wade through them. But we got back and all was well. 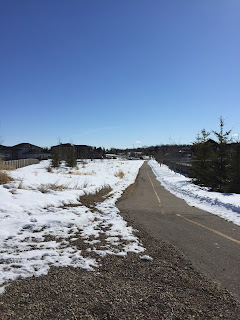 It’s not the same without Macey up front. I dread her passing; it will be bad enough for me...but for him? It’s going to be tough. Those two are quite the couple. But the wind and the sun chase away such dark thoughts. For now everyone is happy and that is all that matters for dawgs.
Posted by Glen Filthie at 12:35